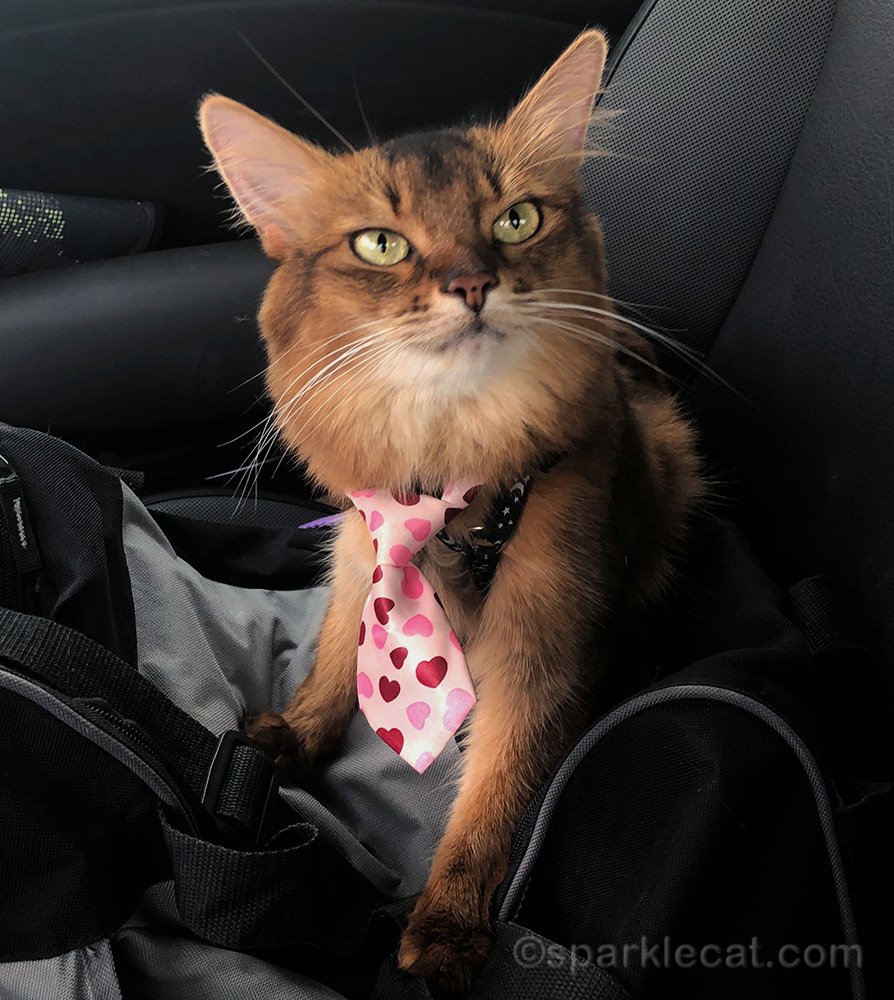 It was a quiet day at the hospital I visited today, and there were two dog teams working along with me. Actually, one was Jake, the dog from last weekend! So we did something that only happens when there aren’t a lot of patients — we teamed up for most of the visits. Meaning that we frequently visited patients, one after the other. We can’t do them all at once of course. It would be overwhelming. Plus it would be difficult to keep all us therapy pets 6 feet apart, as the organization requires. But one therapy pet at a time is nice, and we were all different. Jake is a Pointer, Baloo Bear is a smaller, terrier mix, and me… well, duh, I’m a cat.

The other reason this was really helpful was because Baloo Bear’s handler spoke Spanish fluently. Funny enough, although Jake’s human and mine have Latin surnames, neither of them speaks much Spanish! So my human got to know what the talkative Hispanic lady was saying while I was visiting because Baloo Bear’s human was in the doorway, listening. All my human understood was, “Bonito!” (She thought I was pretty.) But Baloo Bear’s human was able to tell her the woman also talked about the two cats she had who had died. That was actually an especially great visit. The woman had been in a lot of pain the day before, and while she had us visiting, she didn’t need any pain meds at all.

There were quite a few animal lovers among the patients today. One woman visitor told my human they had several dogs, cats, birds and fish! So she was happy to have us come in and visit her relative. In the children’s wing, it is as important to visit the parents as it is the patient. A lot of people don’t realize that. In one room, there was a very sick baby with his parents camped out in the room. The mother was so glad to spend some time with the therapy animals. She told my human that the day before, she had been so depressed, and seeing us therapy pets really cheered her up.

We also visited with a quiet little girl whose uncle (tío) was visiting, and a man who asked my human to take some photos of him with me. It was a really nice three-day therapy pet visit!