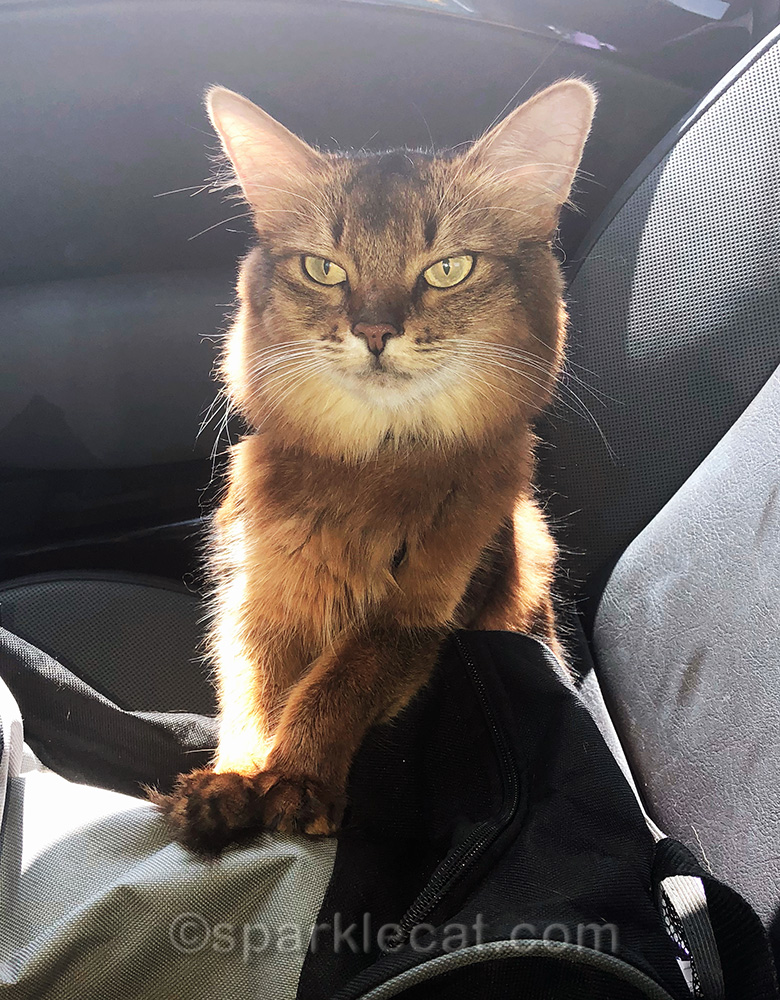 My visit to one of my regular hospitals was a little different from usual — I had a helper! The helper had a therapy dog who passed away, and her new puppy is still in training. So sometimes she helps out with another therapy human who has two dogs by handing the second dog. Or, like this time, she came along and helped by handing out wipes and taking photos while my human focused on my working with the patients. It turned out to be a really awesome set up!

I spent a lot of time in Pediatrics ward and PICU (Pediatric ICU). The first boy I visited had some sort of apparatus over his face, but that didn’t stop him from being able to pet me, and he even took a photo with me. I also spent time with a very nice girl. The nurses told us that another little girl said she wanted to see me, but when we went over there, she was not in the mood! It was actually funny because she was just 2-1/2, and in that toddler “No!” stage. So of course I didn’t take it personally. The last boy we visited in Pediatrics lit up when we stopped by. I had a great time visiting with him, and his parents allowed our helper to take a photo for our social media. So if you look at the Love on 4 Paws Facebook page in the next couple of days, you may see me with the boy.

This was our day to visit the Rainbow Room, and I saw a familiar face there. It was the older boy from last March who was so scared of me that he tried to disappear into his chair. Towards the end of that visit, a nurse had gotten him to come over and pet me, and Lacy, the dog on duty that day too. It was an awesome breakthrough. Today, he hung back a little bit while a sweet little boy petted me. But then the little boy was called to his appointment, and the older boy slowly approached me and petted me. He even got to have his photo taken with me! It was great to see he was doing so much better than the first time I saw him.

I finished up my Rainbow Room visit with a toddler-aged girl who was in a “Yes!” mood, so that was nice. I gave out a lot of high fives and made lots of happy paws today.