You are here: Home / Diary / The Cat Tree Experiment 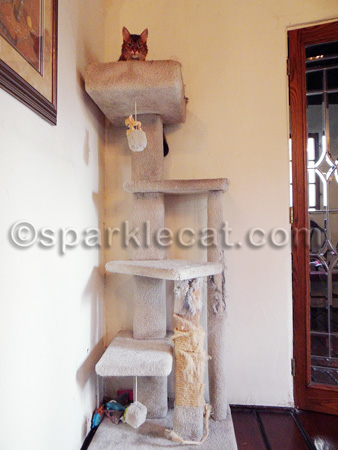 Just look at this cat tree! It is an eyesore! 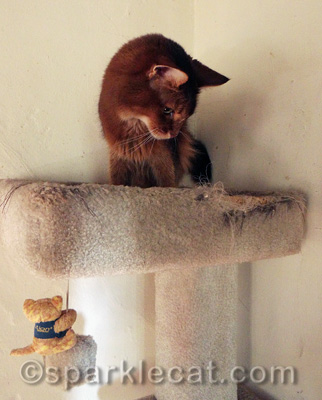 It looks bad enough from the outside up here, but inside it is really disgusting! There is so much old, ground in fur and dirt I should probably just let Binga have the top tier. 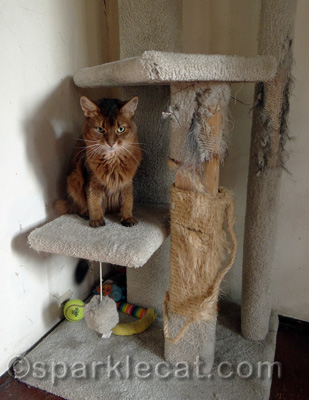 Binga is actually mostly responsible for this damage. One of you (TBT?) suggested that my human recover the planks in sisal, but after nine years, aren’t I owed a new cat tree?

Annoyingly, my human has resisted buying me a new one. She has all sorts of excuses: business isn’t that great, she’s “broke” (trust me, she isn’t), my book didn’t go into royalties,

vet bills, etc. I was getting sick of hearing it. In fact, I was sick of it a whole month ago, if you remember my Flashback Friday post. And I said I had a plan. Well, a month later there was no new cat tree, so I decided to put it into action!

I call it the Cat Tree Experiment. I bargained with my human that if I got a bunch more likes, that would qualify for my getting a new cat tree. She wanted to give it some ridiculous number like a million, but heck, if I could get a million likes, I might as well start up my own multi-national corporation and replace her. So she saw the light and decided on a more reasonable number.

The really great thing is that having more eyeballs seeing my Facebook page posts means I will be bringing smiles and joy to more kitty lovers. And when I have a commenthon or a photothon, I will pretty much be guaranteed to hit my maximum donation! Oh yeah, and it’s another step towards total feline world domination… but I probably shouldn’t say too much about that.

It took my human a while to get the photo right. 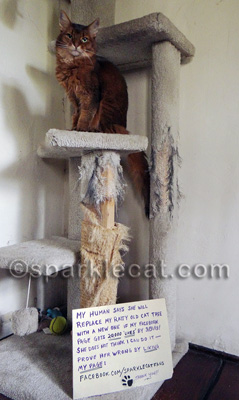 At first she was taking them from way too far away. But finally she got me and the card closer together and I offered up a determined, but slightly wistful look: 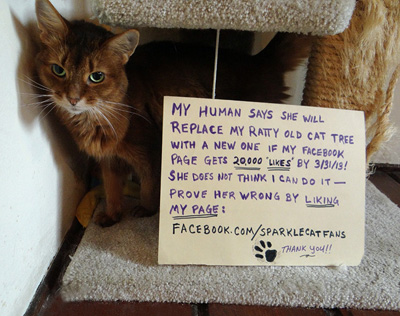 I posted this image on Facebook late yesterday afternoon. I started with 4,165 fans. Right before I published today’s post, my fan number was up to 4,739! There was even a human who called my human an “animal abuser” for exploiting me! (One or more of my fans — I don’t know who — marked it as spam so I only saw the comment by accident, but it gave me a chuckle.) But most everybody else knows I work for good, not greediness (well, except for getting a new cat tree in the bargain). So thank you to everyone who shares — this is going to be quite the adventure!