You are here: Home / Diary / Thankful for My Castle Thursday 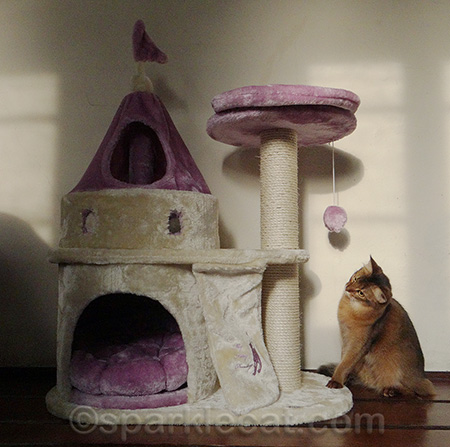 Remember last week when I said that I didn’t want anything for Christmas? With the prizes I got from Sammy and all those cat toys from the Jackson Galaxy Collection, I don’t really need anything, that’s for sure! Plus this awesome Kitty Castle. There is a back story to this castle — I know you are probably wondering when it showed up. 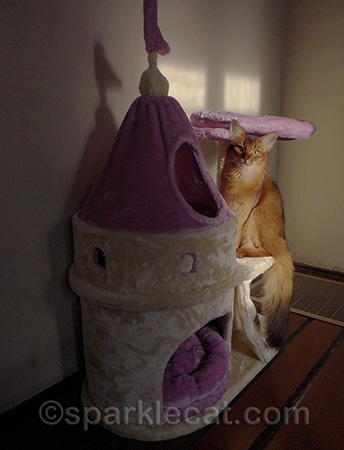 The castle has actually been around here longer than I have! My human saw it on Amazon over the summer, and it always seems be selling at some big discount. Well, when she knew she was going to bring me home, she decided to get it. It is not big, as you can see, and only meant for kittens and small cats. Since I am probably only going to be a little over 7 lbs. full grown, that meant me, so she got it. When it arrived, she put it in a room that never gets used and assembled it (it was not hard)… and left it there. Once she had it, she had no idea where she was going to put it! She brought Sparkle in to look at it once or twice, but that was about it. 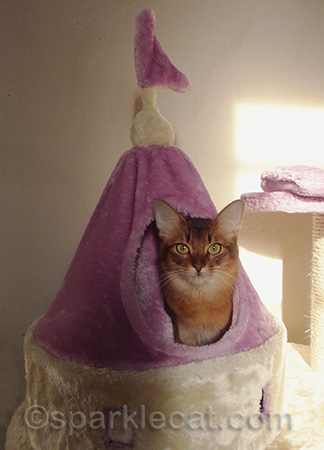 When I came to live here, my human still didn’t know what she was going to do with this castle, so it continued to sit in the unused room for months. What changed? The furnace dying! When the new unit was installed, they put a big air return where the old cat tree used to be, so it couldn’t go there anymore. After pondering what to do for a couple of days, she put the old cat tree in the bedroom, and moved out the smaller Kitty Castle and put it next to the return vent. I immediately knew it was for me! 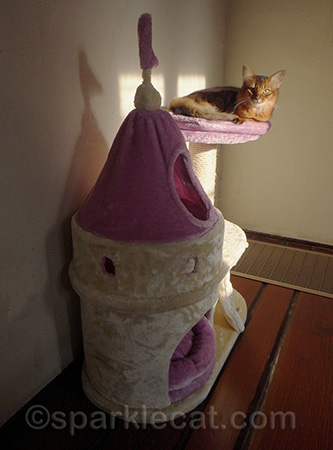 There is supposed to be a cat bed on the top platform, but there was nothing holding it down, so it wasn’t very stable. Instead my human stuffed the bed in the bottom condo part, and that is where I spend some time napping at least a couple times a day. 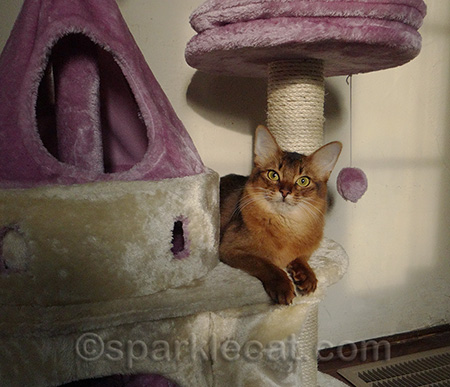 Since Binga and Boodie are too big for the castle, I’m the only one who uses it, and I use it all the time! I hope you don’t think this makes me a spoiled princess. Although being a princess is actually kind of fun.