You are here: Home / Diary / A Sweet Christmas Party for a Therapy Cat 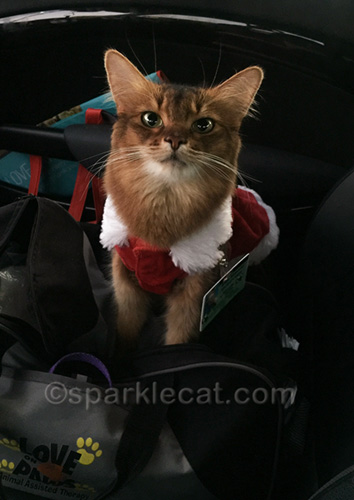 My human said she must have been crazy to sign us up for the event we went to the other night. It was a Christmas party for diabetic children. When she read the description, she immediately put down our names because she thought I would enjoy it. It only occurred to her after she committed that she probably wouldn’t because… well, she does not really like kids! Especially in large groups. So she wasn’t looking forward to it all that much. Fortunately, it turned out that most of the kids were nice and well behaved and only one meltdown happened. Maybe it was because all the goodies were sugar free.

Right after we got there, a serious looking young boy motioned towards me and said, “A cat just like that one visited me when I was in the hospital.” Well, of course it was me! So after that, he followed me around lots. But he had competition. Lots of kids wanted to visit with me. One boy claimed he was scared of cats, but he certainly wasn’t scared of me! After the first time he petted me, he stuck around for a long time. Another boy kept giving me treats until my human had to hide the treat bag. Only a few kids petted me and left, never to return. Most of them kept coming back to visit more. My human taught some of them to do High Fives with me.

There were a couple of dog teams too, and they were also very popular! It was really a fun party for the kids. There were games like Hot Potato, and I think all the kids got presents of some sort. At one point I wanted to go on a stroll and when we walked past the food, my human noticed that all the dishes had carb counts. That must have been really helpful for the parents.

At the end of the party, Santa showed up… but it was not the same Santa that I saw at Petco last weekend! So there may be a fake Santa or two floating around. What do you think?