You are here: Home / Diary / Stop the Media’s Cat Bashing! 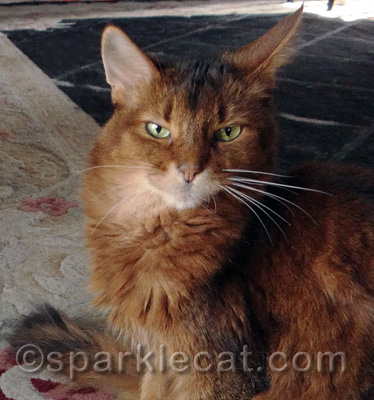 I am hissing mad over a couple of stories I saw recently that needlessly go out of their way to paint cats in the most negative light possible. It is practically a smear campaign, and proof of how easily the media can slant a story to look one way when it is actually the opposite. These “news” articles are trying to claim that we kitties are making humans sick through our feces — when the reality is, the only poisonous crap being spread around are the stories themselves.

This story from NBC News is entitled, “Cat poop parasites may pose public health hazard, study suggests” and it goes on about the tons of feces produced by cats every year, and how some new study looks at the health hazards involved. They make a big deal about the widespread prevalence of the parasite Toxoplasma gondii, and about how this parasite can cause any number of mental illnesses, including schizophrenia. Then, after all this scary, sensationalized information, about halfway through the article, it is pointed out, “the prevalence of T. gondii antibodies in U.S.-born people ages 12 to 49 dropped from about 14.1 percent to 9 percent between 1999 and 2004.” Even the author of the study, Dr. E. Fuller Torrey, admits, “This is not considered a big problem,” and the story goes on to say, “responsible cat owners are likely at lower risk than others.” Even later on, the article’s writer confesses, “the links between the infection and psychiatric disorders such as schizophrenia and bipolar disorder are tenuous.”

So basically, this is a story that reports on a meaningless study, and then goes out of its way to make us cats look bad.

As if this was not sickening enough, NPR — which is supposed to be less biased and more responsible about its reporting than most other news sources — published a very similar story! The writer spends a good portion of her article on Torrey’s study using the same scare tactics, and then in the next to last paragraph mentions, “Torrey also says that while there has been a drastic increase in the number of feral cats, there has been a decrease in the number of recorded cases of T. gondii infection.” So we cats have been needlessly bashed again!

Hello, this is a non-story! On top of that, even though there are more cats, there are fewer humans being infected by T. gondii! Maybe these journalists should be congratulating us cats instead of creating stories that by their very implication condemn us.

As far as I am concerned, if even one cat is harmed or dumped at a shelter because of either of these stories, the writers have blood on their hands.

You human cat supporters out there have your work cut out ahead of you. It is up to you to calmly and intelligently promote the truth about how awesome we cats are, and how healing we are as your companions. It is time to put a stop to these stories that damage our reputation and, possibly, our wellbeing. You in?