You are here: Home / Diary / Stepping Up My Cat Show Game 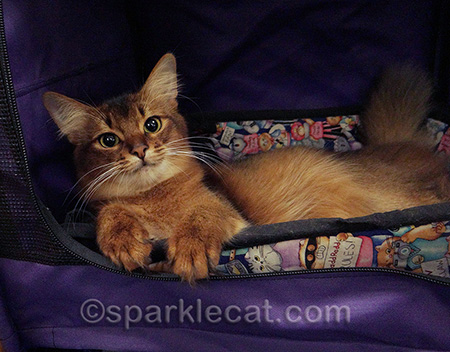 Here I am at my last cat show of 2014! It is my first show in TICA as an Alter, or adult spay breed cat. (The show a couple of weeks ago was CFA. They are two different organizations and I am registered with both.) I was only competing against about 15 shorthaired and 6 other longhaired alters on Saturday, and the longhairs dropped to just 5 others on Sunday. I bet you are thinking that meant I had an easy time competing since there were so few cats, but you would be wrong! Because there were so few cats competing, each ring had only five finalists, not the usual 10. Plus there were amazing world-class Grands in this group, cats that are at the top of their game, and near the top of their standings. I could not find photos of the amazing, ginormous Maine Coon or the pretty little Munchkin who is still young-looking and beautiful at 10 years old, but I did find a photo of the Persian who I was competing against.

Maybe Persians aren’t your cup of catnip tea, but in the world of cat fancy, people love them, and this guy was nothing less than stunning. It takes my human between an hour and an hour and a half to bathe and groom me in preparation for a show. Persians take several hours of work, and must be constantly touched up during the show weekend — and you can’t just let them go between shows either. All that luxurious fur must be constantly maintained, plus taking care of their eyes (and other parts!) to make sure they are always clean. All this work is often rewarded in the judging ring. This guy was fabulously groomed and had a great personality. I always got the cage next to him in the judging rings and I could sense his calm, pleasant energy.

I knew I needed to really step up my game! 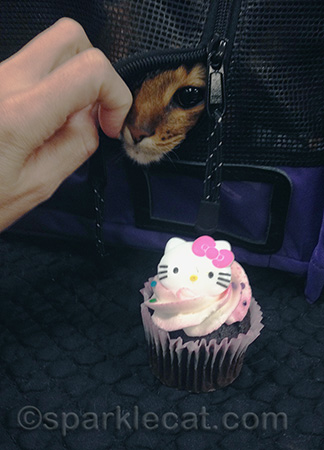 Although my weight is fine and I don’t need to diet, there were no treats for me! No human treats at least. Not that I would have gotten the cupcake anyhow, but if the frosting had gotten on my fur, my grooming would have been ruined. 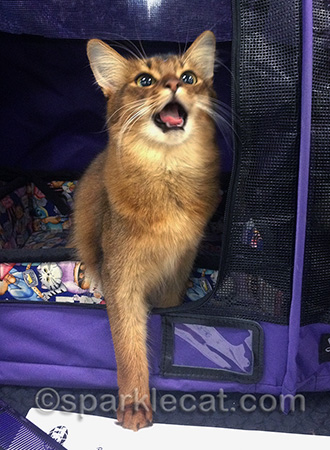 I decided to resort to the super-secret facial exercises that are way more advanced than the ones I showed you before. 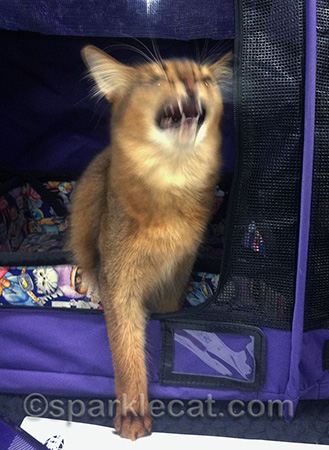 I am not even going to explain how to do them — they are too risky. If you are not already used to doing these types of exercises, your face might freeze this way! 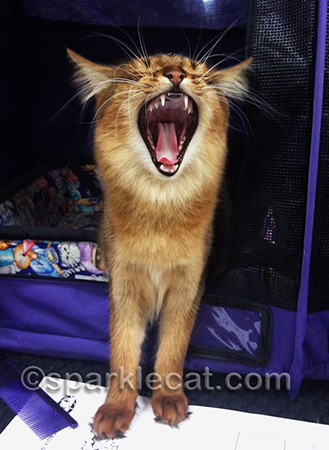 I also did some Primal Scream Therapy. 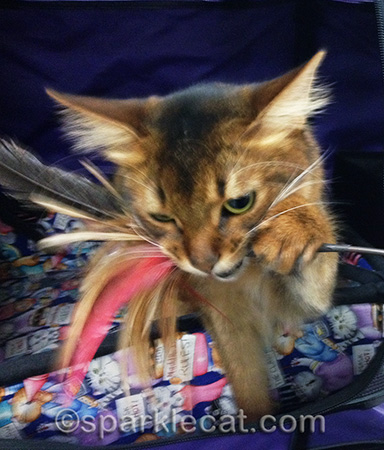 And I took care of my dental health, even though my human said this was not a chew toy. 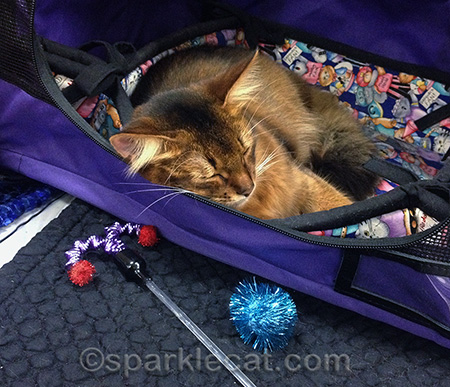 Most importantly, I rested up between rings. 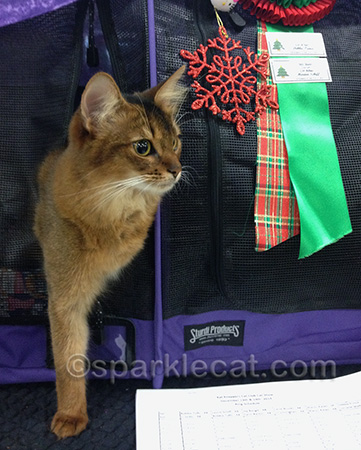 On Saturday, I only finaled in the two Specialty rings — that meant I was only competing against the other 6 longhaired Alters. Honestly, considering my competition, I thought I did fine. It would have really been hard to make top five amongst all these more experienced, beautiful shorthaired and longhaired cats. 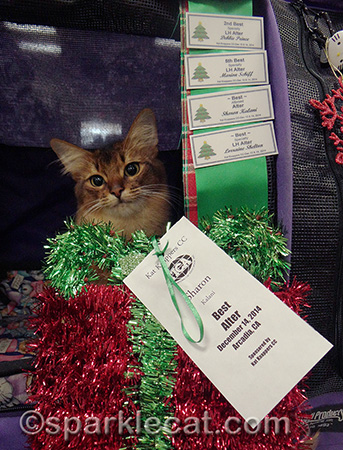 I wasn’t expecting much on Sunday since there was only one Specialty ring, and the rest of the time I was competing against all the Alters… but I got a big surprise! One of the judges who had finaled me the day before was doing an Allbreed (both short and longhair) ring, not only finaled me — she gave me Best Allbreed Alter in her ring! She even said she had been thinking of me the night before and couldn’t get me out of her head. Isn’t that amazing! And Sunday’s Specialty judge gave me Best Longhaired Alter in her ring too. The “Best” cats in each category got these huge ornaments, along with the tab for the ribbon (that’s how they do it in TICA; in CFA, you get separate ribbons for each ring placement). 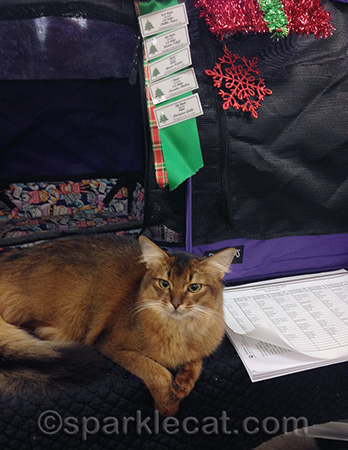 After all that excitement, I figured I was done, but I was surprised to find out I got one more final in an Allbreed ring (I got fourth place)! My human was amazed and so was I. That was a tough show! And I doubt it will get any easier — next time around, I’ll be seeing most of these same gorgeous cats, and more! So I need to keep up the facial exercises and the hard work!