I was spayed last week, and I’ve decided to have a party to celebrate! But first let me tell you about my day. 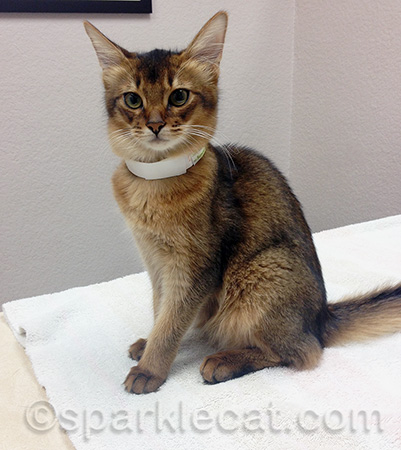 I should have known something was up when my human took me to the vet in an old carrier instead of my pretty pink one. But I was oblivious. I just thought I was going somewhere fun. And it was mostly, for a while. Then they stuck this paper collar on me. 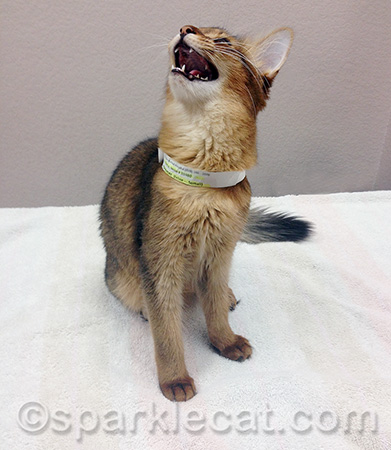 They gave me a number and took away my name! 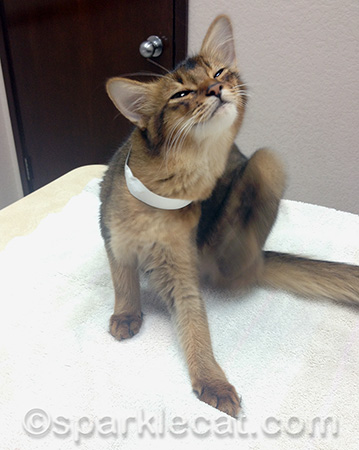 Plus the thing was itchy. I decided to explore while my human and the vet were talking. I actually wasn’t supposed to be spayed this soon but according to my human, I have been displaying some behavior that indicated I was about to get hot or something like that. I don’t get it — it’s already hot here in southern California and besides, we have air conditioning. Anyhow I was rolling on the floor and looking cute and flirty and my human said, “I think we’re getting to her just in time.” Then she left me there and I was the star of the vet clinic! They put me in a cage for a while and everyone talked to me and admired me. It was almost like being at a cat show until they knocked me out. Then I woke up with a cone on my head. 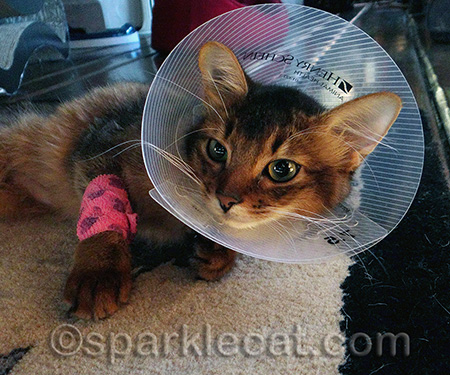 My human felt really bad about the cone, but I’m the kind of kitty who chews on her stomach, so I had to wear something. So she went to the pet store that night and came home with a more fashionable alternative. 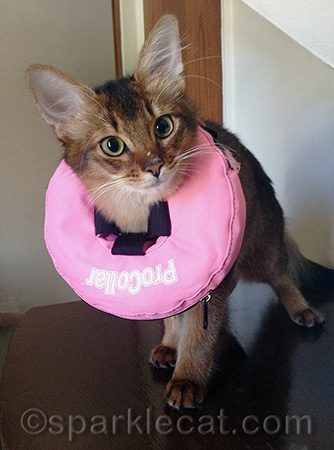 It does make it hard to clean up after eating, though! My human says it was kind of pricey for a one-time use, but she’ll donate it to a rescue now that I’m done with it. So this means I’m taking off doing any shows for about a month while my fur grows back. But it is a lot better than the alternative. My human and my breeder both agreed that being a mom would not be good for my career as a therapy cat in training — I’d have to take a lot of time off to care for a family. And I was developing at an early age and too young to be a mom anyhow. 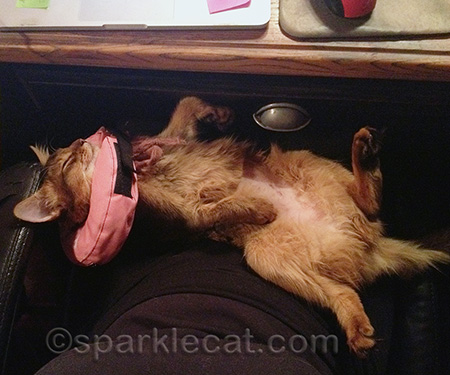 So I think it was a good idea to trust my human with this decision!

Now here’s the fun party part! Instead of today being Labor Day, how about us girls have a Spay Day instead! Do you have a photo of yourself after you were spayed? If you are on Facebook, post a photo of your shaved belly on my Facebook page and I’ll share it! If you are on Twitter, post your photo there and tag me, @sparklecat (I’m posting from Sparkle’s old Twitter name). I’ll retweet! Not on either? You can send me a photo at summer AT sparklecat.com by the end of today and I will share it here!

What about you boycats? Well, you can cheer us girls on and congratulate us for our wise decision! I hope you are neutered too — it’s the only way to be!