It was business as usual around here. Binga kept commandeering the cat tree. 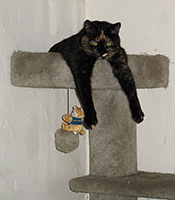 I looked out the dining room window in search of excitement. 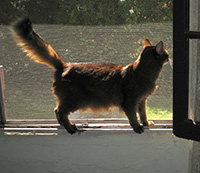 We all spent a lot of time sunning. 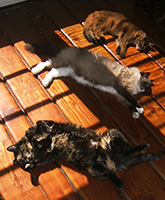 Since they are supposedly “healthy,” she was not sure I would like them. 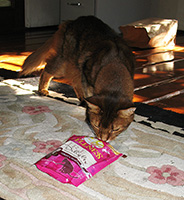 They were actually pretty good. Since my human thinks I am underweight she said I could eat as many as I want. But I have manners (unlike some other cats I know), so I just took one at a time and ate them very politely.

But the monotony was broken with the appearance of the dreaded suitcase. Boodie, clueless as always, decided it was a cat bed.

But once the humans left we didn’t really miss them because we had pet sitters hanging around a lot and spending the night. Still, Binga was annoyed. She proved her displeasure by sharpening her claws on my human’s suitcase once she returned.

Unnervingly, my human told me that she had brought us gifts from where ever she went to. I cautiously looked inside the suitcase, but I couldn’t figure out what was in the box. 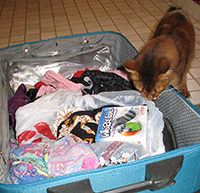 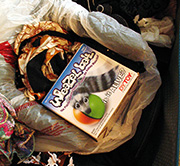 She unpacked it and took it upstairs so I could check it out. 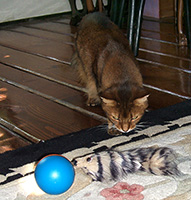 Then she put a battery in it and it spun around on the floor in an attempt to attack me! Fine gift. Not.

But there was another gift in the suitcase too. Binga found it before anyone else did. My human said Binga was playing with it wrong, and that it wasn’t edible.

So she let me play with it for a while, but I have to disgree. I think it tastes just fine. It’s stupid anyhow, a human trying to tell a cat how to play.