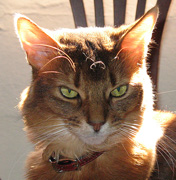 I usually just eat whatever food my human gives me, but occasionally I like to make up my own cuisine. For example, I created a great buttered corn on the cob dish recently — you wait until the human cooks it up for her own dinner and then tosses out the cob. Then you knock over the trash. When the cob rolls out, touch it with your paw and then lick the yummy butter off your pads. It’s a great late-summer treat! 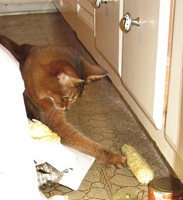 For some reason, my human didn’t like my new recipe, but she was too distracted to make too big of a deal out of it. She spent the first week of the month throwing things into boxes.

This was fun because it meant I had an empty bookcase to play in once again. 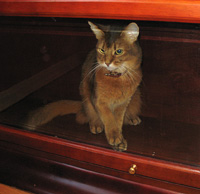 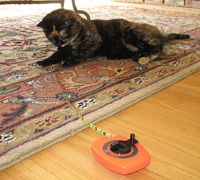 She also spent a bunch of time measuring furniture, which frankly is a dumb way to use a tape measure, if you ask me. Binga, being brighter than my human, realized it was meant to be a play toy.

Ever since I’ve lived in this house, it seems like there have always been boxes around, but this time my human did something different with them. One morning she got up extra early and without even bothering to feed us, she grabbed all us cats and stuffed us in our carriers. Then, before we could even complain much, she whisked us away!

It seemed like we spent only a couple of minutes in the car before we arrived — well, I wasn’t really sure where we had arrived to. All I know is that my human took Boodie and I up to this room. It had my bed, my toys and a litter box — and breakfast — so it looked like we were going to stay there a while.

Like the fake open houses we had to deal with last month, this room had a closed door. We did not like that. 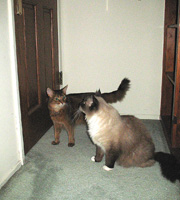 Boodie looked out the window but couldn’t see much. So she went back to doing what she does best — hogging the food. 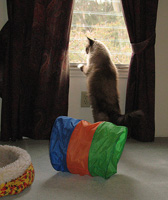 Because Binga was so mean during the open houses, my human put her in a different room. 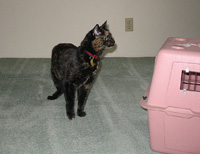 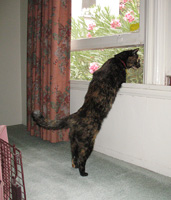 Apparently she had a better view of what was going on, because she kept meowing and making noise. She never shut up the whole time she was in there. I could hear her nonstop. It was really annoying.

We were in these rooms all day! For a couple of hours or so it was quiet except for Binga carrying on, but then we started hearing all this noise. My human showed up with a bunch of guys she called “movers” and they were busy all day. One guy came up to look at us. I think that was the only time I heard Binga shut up.

Finally my human put us back in the carriers and I figured she was going to take us home. But instead she just took us down some stairs and let us out in this dining room area. Much to my surprise a lot of the boxes from the old house were there, along with the laptop computer that my human and I share.

The cat tree was there too, and we were happy about that, even if this room did have a really weird ceiling.

There was a bedroom with the old bed from the last place. I was not thrilled to see that all my human’s stuffed animals were there too. 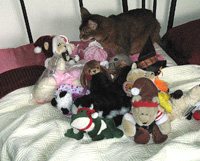 Binga didn’t care — she was just glad to finally be out of the upstairs room. She was hoarse from meowing so much. 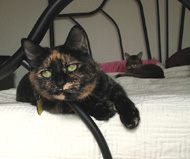 Then we had a contest! My human said that the first cat to use the litter box got a prize. That was me, so I got a really cool feather toy. Unfortunately Binga chewed through the elastic cord and ruined it.

Eventually it occurred to us that we were going to stay here and things got back to normal. Boodie found her favorite toy. I found a nice sunny spot to hang out.

We all decided we liked this place much better than the old one. Except that for a few days, my human kept the double doors in the dining room shut off. She said she didn’t want to overwhelm us by letting us in too many places. Ha!

At last she opened up the door and let us see what we were missing. It started with a winding staircase. It kind of freaked Binga out at first — her tail fluffed up. 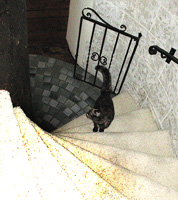 Then we saw there were a couple more rooms to explore, and more double doors that led out the patio where, unfortunately, the dog was. I was kind of hoping she was going to be left behind.

My human treats the new wood floors like they are made of glass or something. She says they are “soft,” not “hard” wood. She even puts down a thick pad when she’s doing her weight training.

To be honest, they don’t feel any softer to me than the old floors. But I like them just the same.