I still don’t like the dog, but I’ve discovered she is kind of scared of me even though she weighs nine times as much as I do. I find this rather intriguing. Maybe I will be able to use this to my advantage at some point.

Unfortunately I only had limited time to explore those possibilities this month. My human’s boyfriend went out of town, and she followed him a week later. Before she left, she had this woman named Nora come over. Nora is a professional pet sitter and at the meeting, she petted us and took a lot of notes. She even gave my human special tags to put on us that had her number on them in case any of us got out while she was taking care of us. My human thought I’d hate the tag, but I felt it was a nice fashion statement. 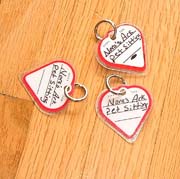 We were all kind of annoyed when my human started packing her suitcase. Here she was, shirking on her duties and leaving us in the care of a near stranger. 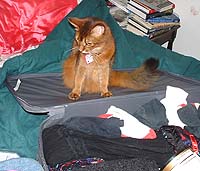 Even Boodie was kind of bummed.

The pet sitter human was nice and Boodie even let her stroke her. (This impressed my human to no end since Boodie is scared of everybody.) The only thing I thought was annoying was that she spent so much time with the dog. That dog is so needy for attention — it’s really kind of irritating. Why don’t dogs understand that humans are lesser beings meant only to see to our food, litter boxes, and to buy us toys? I mean, it’s so obvious!

Of course, we were expecting my human to return with some really great toys. Or at least some yummy crab (she and her boyfriend went to Maryland, and I keep hearing about the crab they have there). The best thing about humans going out of town — at least for cats  — is that they feel guilty about leaving us and bring home special treats. Or that’s what’s supposed to happen. So we were all excited when the humans came home. The moment my human opened the suitcase, Binga leaped in looking for the toys, but she couldn’t find any.

Well, it turned out they were there, buried deeply under some clothes. According to my human, Maryland has some really fancy pet stores, but this is what she brought home:

That’s right — one dumb sparkly ball and a two-dollar catnip bag. I was appalled, but the other cats didn’t seem to care. Binga immediately grabbed the sparkly ball and stalked off. Inevitably, she lost it under the couch. 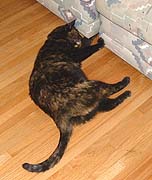 Boodie, of course commandeered the catnip bag and drooled all over it, making it totally unappealing for anyone but herself.

But there was more — my human said she got something especially for me. (Later on I found out it was an impulse buy at the airport on the way home. How insulting!) I thought maybe she had come through with some crab. Well, I was right and I was wrong. It was a really lame crab toy that vibrated when you pulled its string.

I tried pulling the string myself but I couldn’t make it work.

What a boring toy! The blank TV screen is even more interesting than a dumb vibrating crab.

The month ended on a bad note. My human was putting together my photos for my 2005 wall calendar and she decided she didn’t like any of the shots of me wearing that hideous clown collar that she got at the Pet Expo in April. So she pulled it out and made me pose in it again. Of all the photo sessions to do over, it just had to be that one!