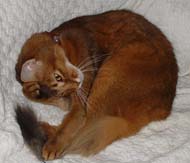 I’ll have you know it’s not easy writing these diary entries every month. In fact, I really have better things to do, like chase flies and beat up on Boodie. But another month has come and gone and it’s that time again, so here goes. But I may need to rest my head when I’m done. Oh yeahâ€”naps. That also takes high priority on my “to do” list.

Anyhow, my human and her boyfriend went to some fancy function this month. It was held by the Pet Orphans Fund to celebrate their 30th year of promoting companion animal welfare. I was kind of annoyed because they said I couldn’t go. After all, I’m a designer cat and I’m certainly good enough to share space with Ernest Borgnine (I heard he was in attendance). But they still said no. I found out later that they had dogs there! Whatever. My human tried to make it up to me by bringing home some party favors. Did she pack up some of the tasty fish they had for dinner? No! She returned with a handful of cheap cat toys. 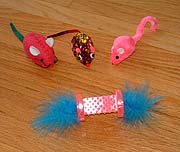 Apparently these things were used to decorate the tables where the guests had drinks and hors d’oeuvres. I was not impressed by these paltry trinkets. 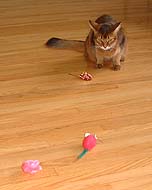 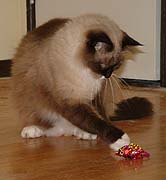 In fact, she began walking around with it in her mouth, like she’d captured some special prize. I tried playing with it, but I thought it was pretty dull.

Later on she lost it under the couch. That’s where all the toys wind up eventually.

Binga didn’t think much of the toys either, but she did like the balloon, which was another thing my human brought home from the Pet Orphans Fund anniversary celebration. Actually, she liked the ribbon better than the actual balloon.

Boodie was totally envious that Binga got to play with the balloon. She’s lucky Binga even let her get near it.

A couple weeks later, workers started coming in to finish the living room. That meant that all the furniture had to be moved around. A lot of cat toys started reappearing. 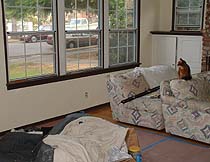 Then my human and her boyfriend disappeared completely for a whole weekend. This girl showed up and gave us food. She kind of insulted me by calling me a “little cat.” I’m not littleâ€”I just live with big Amazon cats! But I was nice to her anyhow, even though she spent time playing Frisbee with the dog. I even rubbed up against her legs. She wondered why we never ate the food until after she left. There was a good reason! We didn’t know who she was, so we let Boodie come out and take the first bite. Since she didn’t keel over and die, we knew the food was safe.