You are here: Home / Diary / The Rock Cats Were In Town!

The Rock Cats came to town! My human was excited to go because she had never seen them before. She was lucky to get tickets because the show was sold out. She did not bring her good camera (the one she uses for me), so you will have to excuse the quality of these photos — they were taken with her iPhone, and theaters are not the iPhone’s strong suit for picture taking. 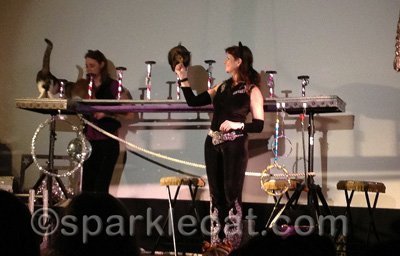 The show started with a bunch of Acro Cat tricks. Some rats also did tricks, and a chicken beat out a cat at bowling (I think it was rigged). It was all very fun. My human couldn’t get many photos of the tricks because she was a little too far back and the kitties were moving too quickly for her slow iPhone. 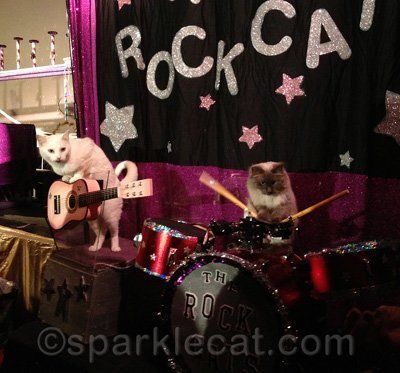 There were more photo opps when the band set up. 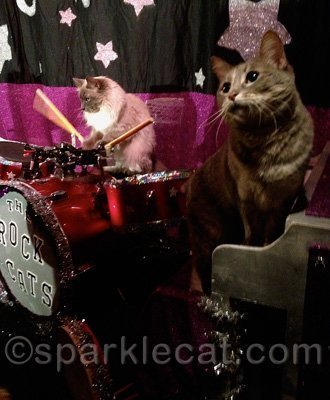 The main human, Samantha Martin, is very smart. She knows that we kitties do not work for free, so she kept lots of fresh chicken, tuna and salmon on hand. As long as she and her assistant paid, the cats played! Samantha is very active in cat rescue, and she often fosters cats and kittens from rescues in and around the Chicago area where she lives. She always teaches tricks to her fosters. In fact, she admitted that some of the Rock Cats are “foster fails” (in other words, she wound up keeping them instead of adopting them out). 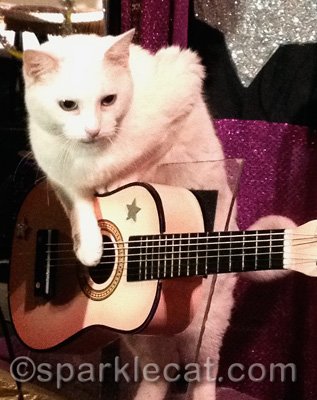 All the cats in the show except two are girl cats. Which just proves that we girls can rock as hard as the boys! 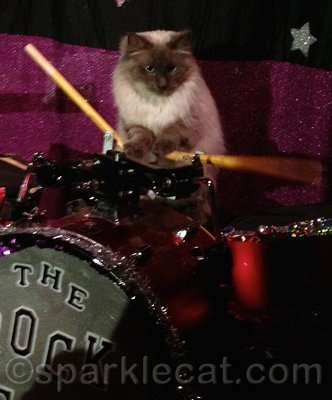 The drummer was awesome, except that she had a brief temper tantrum and got into a little smacky fight with the keyboardist. Those drummers have a wild streak, you know. 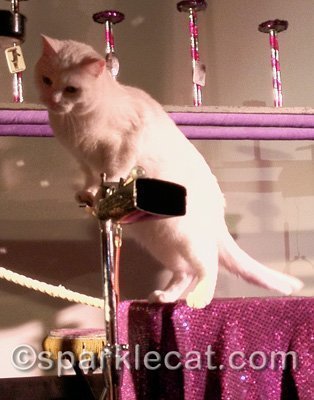 Tuna is the leader of the band, and inspiration for the show. She is rather quirky — like a true diva, she keeps away from the other cats and she loves ringing a desk bell above everything else (as long as you pay her). One thing Samantha emphasized was that teaching tricks to your cat creates a stronger bond, and some tricks, like getting us cats to come when called, can be important in an emergency. In fact, she was selling training kits. I’m sure my human had way too much sense to even look at them, much less buy one. 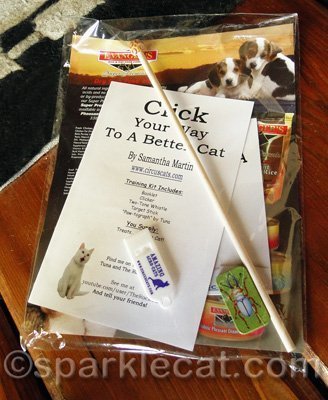 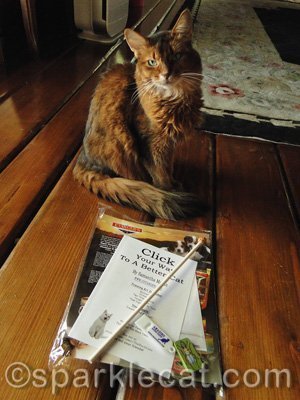 This is for Binga, right?