You are here: Home / Diary / Returning the Old Dress, and Cat Food Guidance for a Human 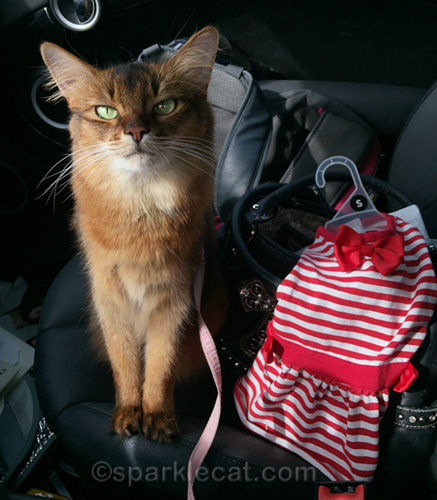 As you know, my human returned the original, too-big dress she got me a few days ago. She also brought me with her in case they had one that might fit. Well, if you saw my Sunday post, you know she did, but a lot more went on at the pet store than just clothes shopping! 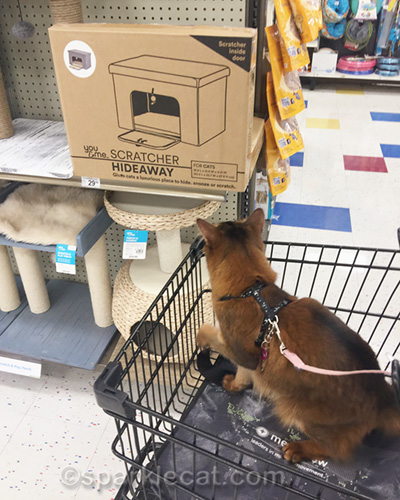 Of course we did a little browsing! And one funny thing is that someone who met me at the cat show in Glendale a couple of weeks ago saw me! I bet she wasn’t expecting a celebrity sighting. That was fun! 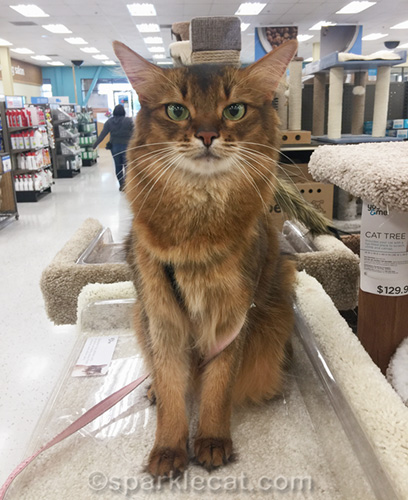 We also met a guy who thought I was totally awesome! He has an Abyssinian, and he and my human started talking about him. The guy was worried his cat was getting fat and didn’t know what to do about it. (He showed her a photo, and yes, the kitty was overweight.) The first question my human asked him was if he fed him dry food and if he left it out all the time. I think you know his answer to that! Of course he did.

It’s not that his guy was feeding his cat cheap food. He was getting him both premium canned and very expensive dry food. But he was just feeding him too much. My human pointed out that if humans are around food that is left out all the time, they’ll eat too much too. The Aby’s human thought I was in great condition, and my human said it was because I was strictly portion controlled and I don’t eat too many treats — and when I do, I have to earn them by doing tricks.

She suggested that the Aby’s human ease him into a meal routine, and stop leaving food out. Of course, that is easier said than done. We are all used to meal routines here, so we don’t beg for food when it’s not breakfast or dinnertime. The Aby’s human will have to get past the begging hump — the part where the cat tries to manipulate the human to get more food. My human is mean and does not give in on things like that, but male humans tend to be softies. At least my human’s boyfriend is. He is way more lenient than she is. 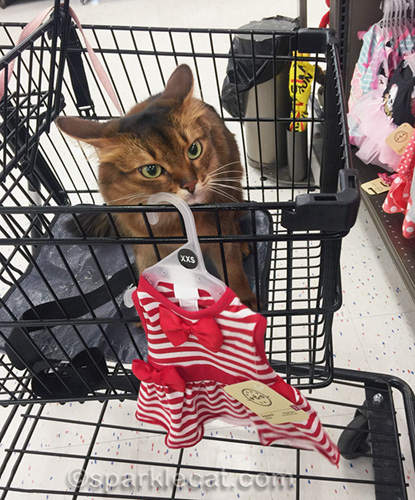 Anyhow, back to the dress shopping. After my human returned the dress, we went over to the clothes rack to see if there was another one in my size. All we could see was an XXS, which is think is for teacup pets! You can see how tiny it is here. 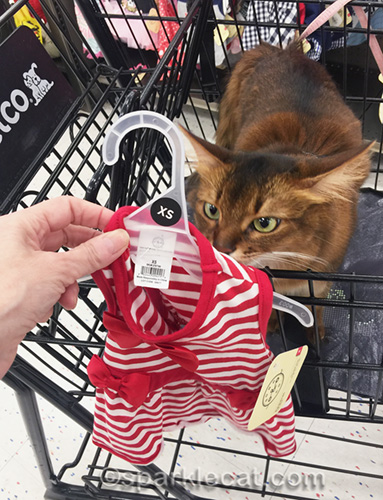 My human was about to give up, but an employee happened to be walking by. And she looked for a moment… and found the dress in my size! 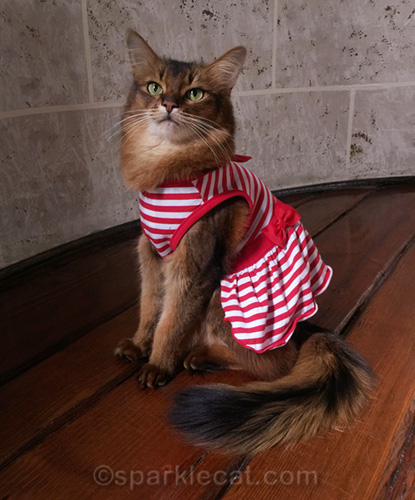 And that’s the story of how I found my new dress.