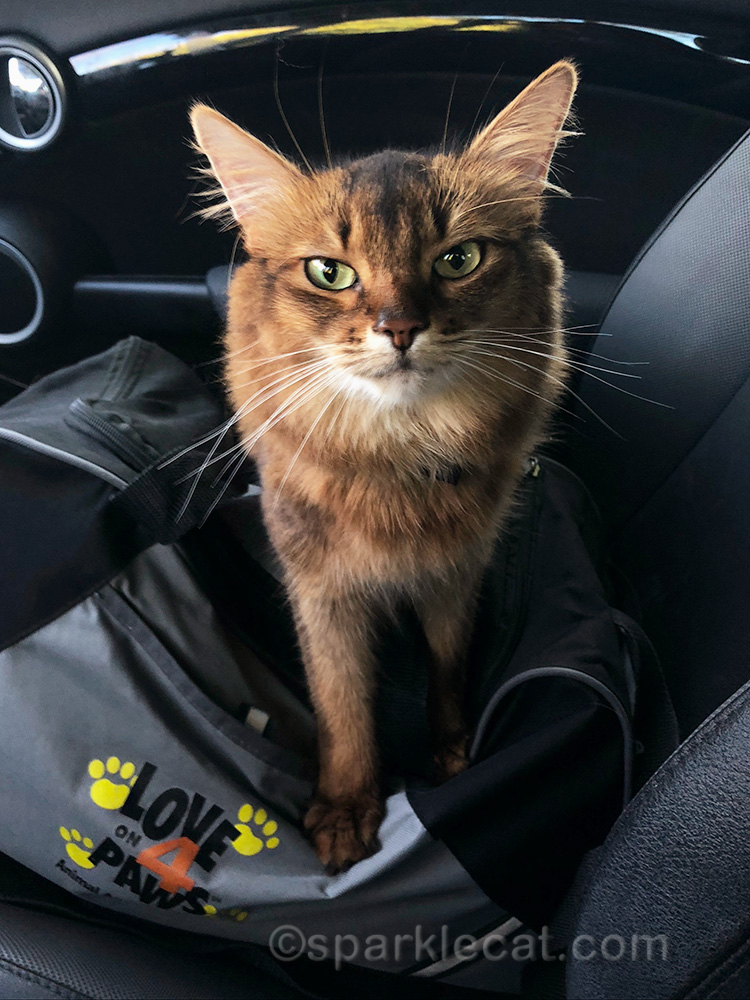 My therapy cat visit this week was to the children’s hospital. I’m still so glad that my human is up and active again that I’ve been really excited to go out! So this visit included lots of extra added purrs.

Our first stop here is always the lobby, and I cheerfully hopped up on the couches to visit with the young patients waiting for their appointments. I think I surprised a couple of them! But they were all happy to see me. My human took lots of photos with our Polaroid style camera, and I always posed nicely, sitting next to the patients. One father told my human about a poem he wrote about a cat he had, in Persian.

There was one row of exam rooms that was mostly full, and I visited them all! The first was an older teen girl who was delighted to see me. She posed for a photo on the exam table, with her good arm around me. One 12-year-old boy was up from San Diego with his dad, and his dad told my human that the mom was training a therapy dog. I liked the boy lots, and gave him head butts. He didn’t want his photo taken, but his dad insisted on pulling out his phone so he could send a picture back to his mom.

A lot of the patients mostly spoke Spanish, but as you know, that doesn’t matter to me. At this point, it doesn’t matter to my human either because she is able to communicate most of the important things in her broken version of Spanish. You know, things like my name, and my age. One older boy spent a lot of time with me, and chatted with my human while his younger brother ran around being noisy and eventually having a meltdown. Did I care about the youngster having a meltdown? Not one bit! I think it may have bothered my human a little, though. She just sort of gritted her teeth through it.

My last patient of the day was a girl in pre-op. She had on a plastic cap on her head, and she was already a bit sedated, but she really enjoyed petting me for quite a while. The main problem with pre-op is that there is nowhere for me to comfortably sit. I can’t really sit on the bed they are using to take the patient to the operating room. And I’m too small to stand next to the bed. So my human found the best answer was to crouch down next to the patient’s bed, and let me stand on her knee so the patient could easily reach me.

I had such a fun time, I was still purring loudly when I came home.