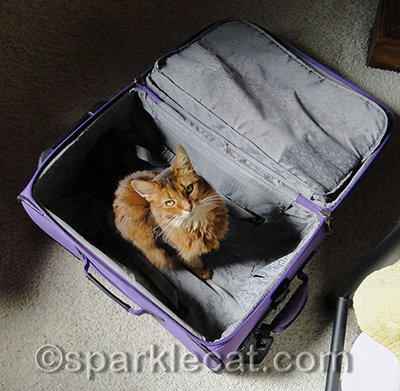 I did not want Professional Pet Sitters Week to pass by unnoticed! Because if there is a pet sitter coming to your home, it means (usually) that your humans are going away. And it is important to know how long your humans are going to be replaced by a pet sitter! See the suitcase above? That is a small suitcase. When my human packs this one, it means she won’t be gone for more than a weekend, three days at the longest. 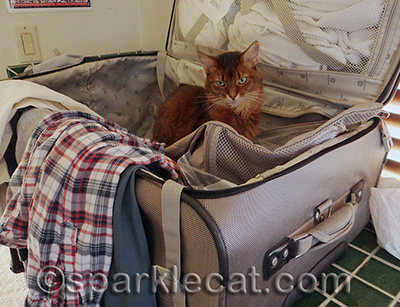 This big suitcase is Bad News. It means that someone is going missing for several weeks! Fortunately for me, it is always my human’s boyfriend who packs this suitcase. He is a touring musician and when he packs this suitcase, he is usually going to Europe, or has a bunch of shows to play on the East Coast. I don’t care if he is gone. In fact, I kind of like getting to use his pillow when he is away.

There are a couple of in-between suitcases, and when my human packs one of those, it is usually good news because she is probably going to a conference like BlogPaws or the Cat Writers Conference, and she is going to bring back a goody bag of swag for me, Binga and Boodie! 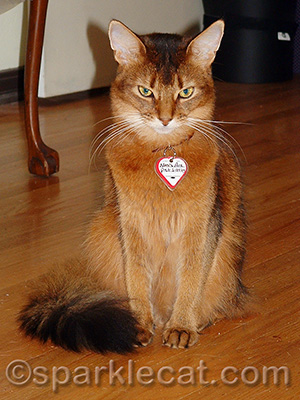 As you probably have guessed, we kitties have lots of experience with pet sitters! The first one we had was back at the old house, in 2004. My human went back east for some shows her boyfriend was playing and we got a nice woman named Nora. In those days neither my human nor her boyfriend had a cell phone, so Nora put temporary tags on the collars we were wearing at the time that had her phone number, in case something happened and we got out. If you want to read more about Nora, and the humans’ trip, you can read my September 2004 blog post!

Here are just a few suggestions about what you kitties can do about the whole travel and pet sitting thing:

I hope you enjoyed my tips! And nice as they can be, I hope your experiences with pet sitters are few and far between!