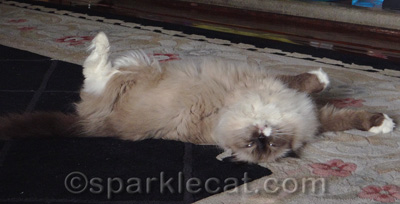 Sometimes it’s best with these Photo Hunt themes to just focus on the obvious. Quirky and Boodie are one in the same. She is a very strange cat, and always has been. Let me tell you a little about her. I’m not sure if I ever told you her whole story.

When they were five months old, Boodie and her sister were stuffed into a box and dumped in the parking lot of a vet clinic. Nobody knows where they came from, but judging from their appearance and behavior, they may have been kitten mill rejects. They were very fluffy and pretty, with Meezer points, possibly Ragdolls or Birmans, but almost completely feral. They feared humans and hissed at them whenever one came near. One of the clinic’s clients was a pet rescue, and they wound up taking them to the rented space in Studio City where they had their cats.

My human was volunteering for this rescue and around the time the cat before me died, the two kittens had been there for four months and were no friendlier than when they came in. Except for one thing: my human discovered they loved to play, as long as it was a wand toy, or a toy on a string — anything that kept humans farther away than arm’s length. With the cat before me gone, Binga was alone and my human did not want her to get used to being an only cat because she knew she was eventually going to get a Somali (I had not been born yet). So she offered to foster one of the kittens for a while. She was crafty. She played with Boodie for a few minutes and when she was off guard, she snatched her up and stuck her in a carrier.

Once she got Boodie home, my human put her in a room all by herself, and for a week, the only living, breathing being Boodie ever saw was my human, who came in there several times a day to feed her, play with her, change her litter and get her acclimated to being around humans. Eventually, she was let out and she immediately gravitated towards Binga. Even though she is fine with people now, although shy with strangers, Boodie has always been a cat’s cat. The curious thing is that ever since she has been here, no human has ever laid a mean hand on her, but she still sometimes cringes when someone reaches out to pet her on the head. Meanwhile, she lets Binga chase her around the house and beat her up mercilessly! But she likes the rough play Binga dishes out, because she always goes back for more. Once my human caught Boodie throwing one of her toys at Binga, totally asking for trouble!

My human would have been more than happy to see Boodie get adopted, but the rescue only called to have her brought back to be seen once, and after that my human never heard from them again! Boodie’s microchip is still registered in the rescue’s name, even though she has lived here since February 2002. 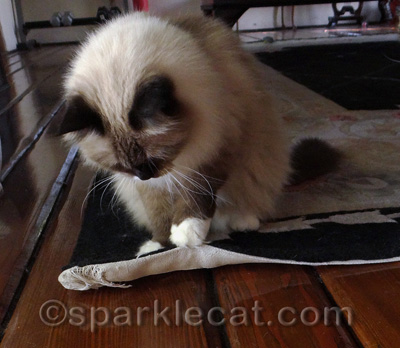 Boodie is everything that people who don’t like cats complain about. She sheds like crazy and she is the only one out of the three of us who uses the rug to scratch on. 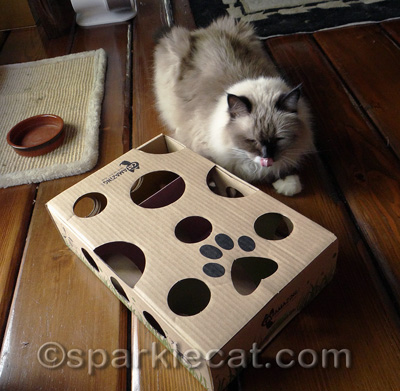 My human also claims that she is the dumbest cat she has ever known. Remember the CatAmazing toy I reviewed and gave away a few months back? Boodie had no idea how to work it. She just sat there and somehow expected the treats inside it to come to her.

She also does not know how to meow. Instead she makes these strange space alien noises. And sometimes I think she really is from another planet. 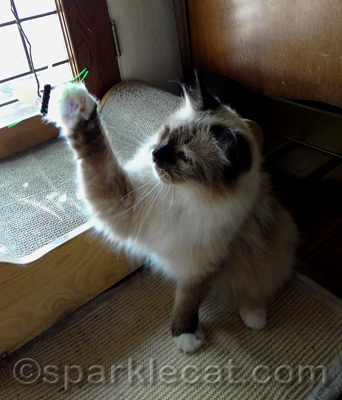 But she is also the most playful out of the three of us! She will play with anything. Once she was caught carrying around a small bag of screws and hardware like it was prey. She also talks to her toys as she carries them around, in that weird, space alien dialect.

So now you know the story of my quirky roommate, Boodie!