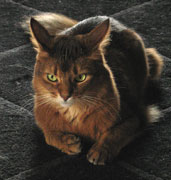 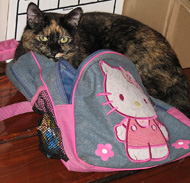 Binga thought that maybe if she commandeered her backpack, my human wouldn’t be so inclined to leave town. She did stick around, but nothing got done around here anyhow.

I am still waiting for someone to remove the wooden shutters from the floor.

She doesn’t even care that my cat tunnel was ruined when the shutters fell over. 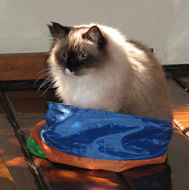 While my human’s boyfriend was out of town, the dog didn’t come inside as often. This suited me and Boodie just fine, but Binga is not happy about it.

Maybe my human was feeling bad about the shutters and my cat tunnel because she came home one afternoon with some gifts. I wasn’t sure what was in the box, but I knew it was for us because there was a picture of a cat on the side.

Apparently, whatever it was, it took some assembly. Boodie tried to help, but as we all know, she is not very bright. 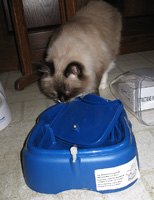 Binga didn’t care about this contraption. She did like the box. 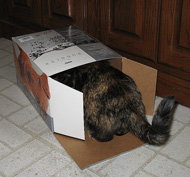 As is typical with my human, this thing sat around unassembled for a while. Eventually it occurred to me that it was a new water fountain to replace the old one. She even added some sort of stuff that’s supposed to be good for our teeth. My human is a fanatic about dental health.

Even more interesting than the water fountain was the new cat bed my human gave me.

At least I thought it was for me. Binga and Boodie didn’t necessarily agree. 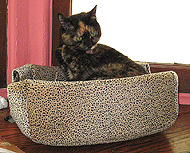 But the really cool thing about the cat bed was that it also opened up into a cat cube.

This seemed to confuse Binga. And she thinks she’s so smart! 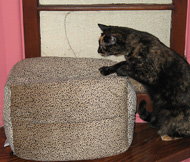 Of course, I knew right away how to use it. 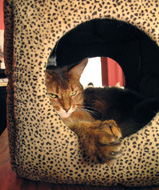