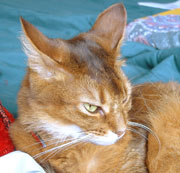 My human got a new memory card for her clunky old digital camera. I broke it in properly by showing off my most annoyed expression.

Just so you know, Boodie and I are friends again. I decided she wasn’t an impostor after all. So things are back to normal.

Or at least as normal as you can expect in our household.

The humans here sit on their butts and leave so much stuff undone. For example, it took my human’s boyfriend a couple of weeks before he finished unpacking his suitcase from their September trip. Binga decided it made a nice bed.

Then there was that huge box that sat in the living room for nearly a month. It took forever for my human to finish opening it, even though I tried to help her. 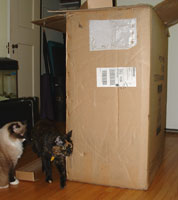 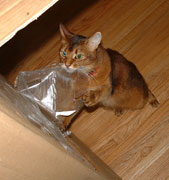 Binga thought it was her own personal perch.

Finally she got around to getting the big thing out of it — I have no idea what it is — some dumb piece of furniture for her office. 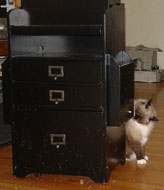 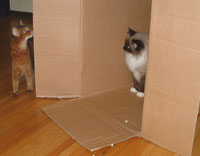 But we cats didn’t care about that — we were just glad the box was freed up so we could play with it! Except for my cat tree, this is the biggest cat toy we’ve ever had! 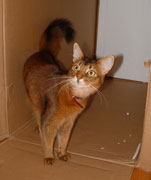 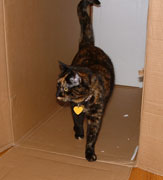 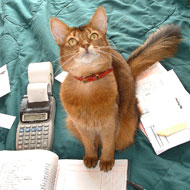 And then, around the middle of the month my human started fooling around with her paperwork again. She was thinking of selling one of her websites (not mine!), but she changed her mind. In any case, it gave me a chance to play, look cute and annoy Binga, which is really all that matters.

I just wish she would figure out that I don’t need help with the looking cute part. As soon as Halloween rolled around, she started pulling out all the usual, annoying holiday junk. First it was the hideous orange cat in a witch hat. 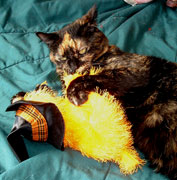 But it got worse. She brought out a Halloween stretch bracelet and made me wear it as a collar.

I hate posing in cheap costume jewelry. It itches.

And if that wasn’t the worst of it, she also had a really awful Halloween clown collar! I was thoroughly humiliated. 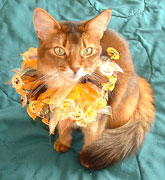 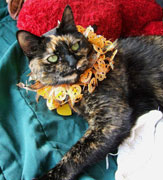 She put it on Binga too. Binga was none too thrilled. My human took it off her after she tried to eat one of the pumpkins. That was smart — I should have tried that.

Boodie did us both a favor and tried to destroy it. She is really a pal!

I loathe holidays — all I have to look forward to is more human “creativity.” Yeech!