That Pet Orphans Fund event was weeks and weeks ago and Binga’s still fascinated by the balloon my human brought home. It’s been hanging from a door hinge and gradually losing air. Binga watches it by the hour, hoping it’ll get low enough to catch. I think she’s going to have a long wait.

But enough about herâ€”I have an announcement to make! I’m a first place winner in the photo contest held by CatsUSA. It’s in the 2004 issueâ€”the magazine (which is put out by the same people who do Cat Fancy)

comes out just once a year. My dumb human got the prize money in the mail and at first she didn’t even know what it was for. She was ready to send it back as a mistake until she realized it was for the photo of me she sent in last April. I knew it would winâ€”it’s a great action shot of me. And besides, I’m an absolutely fabulous looking cat, as you know.

Everybody insists that my human buy a cat tree with the prize money. So maybe I’ll finally get one now! My human still doesn’t see the value of having one. She pointed out, “Why do you need an expensive cat tree? Look, Binga can make a plaything out of cardboard box!” I don’t think she looks terribly thrilled, do you? Oh yeah, and in addition to the money, I get a year’s worth of cat food. What if I don’t like it? My human said, “That’s okayâ€”then I’ll just give it to the cat rescue organization down the street.”

These guys came in and ripped up all the tile over the upstairs bathtub. Boodie has been guarding the bathroom while the work has been going on. But she won’t let the workers touch her.

Binga has not been happy about the bathroom being torn upâ€”she hasn’t been able to roll around in the tub for the better part of the month. The workers left a gaping hole in the bathroom for a couple of days. My human and her boyfriend taped plastic all over it. The bathroom door doesn’t shut firmly and they were concerned that one of us would shove our way in and start exploring inside the walls. Spoilsports! 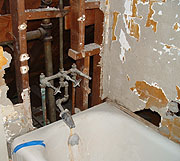 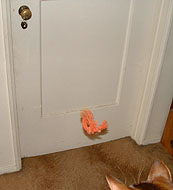 Lately I’ve been hanging out on one of the upstairs balusters. I know it doesn’t look all that comfortable, but it’s easy to just walk over the banister and look out the window at the balcony. 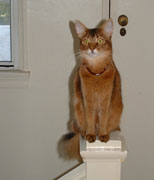 One day my human heard a high-pitched, little barking noise. She looked out the balcony window and this is what she saw: 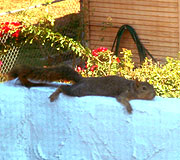 I was downstairs and missed it. Darn!