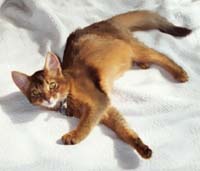 So, what is a purebred Somali cat? I imagine you want to know. People often refer to Somalis as long-haired Abyssinians and that’s pretty close to the truth. Many decades ago, we long-haired cats began showing up in Aby litters. The breeders tried to keep us a secret and quietly gave us awayâ€”after all, we certainly didn’t fit the Abyssinian breed standard! But we were just too pretty to be pushed off to the side like that and eventually someone decided that a long-haired Abyssinian was actually a good thing. So we started becoming our own breed.

While Somalis are not exactly rare, there really aren’t that many of us around when you compare us to Persians, Siamese, Orientals, or Abys. You can’t find a Somali just anywhere. My human had to go to Temecula to get me, and that’s nearly an hour and a half from where she and her boyfriend live. 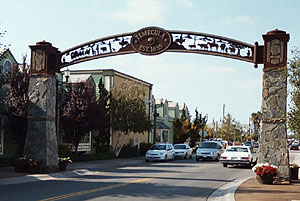 There were actually a couple of Somali breeders who were closer, but I guess my human got to knowÂ the lady who owned my parents first. At least that’s what I hearâ€”after all, it was before my time.Â Besides, she wanted a ruddy or red Somali and the other breeder she knew about specialized in dilutesâ€”the lighter colors. I am a ruddy, and a fine example of one too. I should beâ€”my parents are MilesÂ Davis and Tina Turner.

Don’t laughâ€”it’s true! My breeder names her cats after blues performers. She didn’t name me, thoughâ€”she feels that the new owners should feel free to name the kittens. So I didn’t get to be named after a blues singer. My human likes Billie Holiday and Bessie Smith, but she already has a cat named Binga and a foster cat named Boodie. “There are already too many B-cats around here,” she reasoned. So she decided to call me Sparkle. Her boyfriend, who never likes her names for cats, calls me “Squirrel Head.” Perhaps this is in honor of my human’s old cat, Harlot, who hunted squirrels, but that’s another story.

My human and her boyfriend came to get me on a Sunday in October. I was born on June 24, 2002 so I was just four months old. I really had no idea what to expectâ€”I’d only met my new people once before and didn’t realize that they were going to take me far away from where I was raised. Before I knew what was happening, I was placed in a black mesh carrier with leopard print trim and whisked away. I was so taken by surprise that I cried during most of the trip and I wasn’t very hungry for a day or so. But considering what I was faced with when I got to my new home, who could blame me? 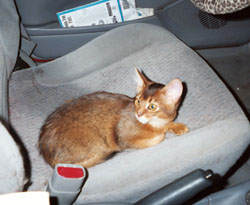 First off, two big, very hostile cats weren’t exactly pleased to welcome me. Binga, the tortoiseshell, who is about two years older than me, was rescued from the pound when she was an eight-week-old kitten. She’s tough and sort of a bully. She’s friendly to other people and likes licking them with her rough tongue, but she seemed to have a grudge against me right from the start. 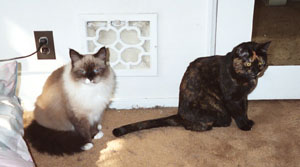 Boodie wasn’t too fond of me either at first. She’s actually a purebred, too – she’s a Birman, although her flawed markings definitely indicate that she’s not show material (apparently it’s hard to get the markings just right on a Birman). But Boodie is also a rescue catâ€”she and her sister, Lucy, were found in a box in the parking lot of a vet clinic. After my human’s old cat died, she brought Boodie home because she needed to be “socialized”â€”she was frightened of people and would cringe and hiss at everyone. By the time I came home, Boodie was friendly enough with my human, her boyfriend and an occasional friend, but she was still a bit shy around most other people. She has never been shy around other cats, thoughâ€”she’s a real cat’s cat. She became friends with Binga very quickly, especially because she let Binga beat her up and play roughâ€”then she’d come back for more. Boodie is a very easily dominated cat. But even she wasn’t too thrilled when I showed up. 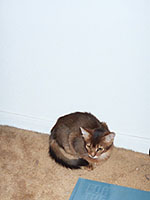 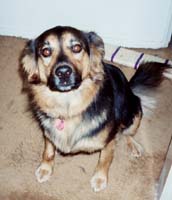 But the absolute worst thing about my new home was this big, loud, heavy creature that kept jumping around! I thought she was going to either eat me or crush me when I first saw her. I had no idea what she wasâ€”I’d never seen anything like that in my life. Someone said she was a “dog” and her name was Sushi. I’m told she’s harmless and she and Binga like to wrestle all the time, but still, I’d rather have nothing to do with her. When she comes too near me, I “explode”â€”at least that’s what my human calls it. Whatever you want to call it, it keeps this Sushi dog from coming too close to me. Good.

My first impression of my new home was rather dubious, to say the least. I didn’t mind being isolated from the other cats in the downstairs bathroom, and whenever I was allowed out, I spent most of my time in my human’s lap while she worked at the computer. Frankly, her office is a mess.