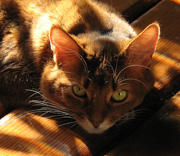 Great news! My favorite chunky cat food is back on the market! It’s about time.

My human brought home a couple of copycat pouches. They are all right, but I like my old brand better. 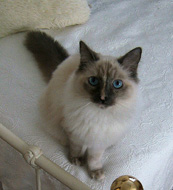 My food came back just in time for Thanksgiving, which was a good thing because the humans left us alone all evening and I had something to look forward to when they got back, even if it wasn’t turkey. From the way my human smelled when she returned, I got the feeling she was feeding turkey to — horrors! — another cat. Sure enough, there was evidence on her photo card.

The other big news of the month was that the humans went to some huge thing called a “Lint Roller Party.” It was a benefit for the Los Angeles chapter of Best Friends, which is supposed to be a really great animal rescue organization — my human donated items from my merch store for their raffle last July. But what really thrilled me was the goodie bag my human brought home from the party. I have to say, though, I had my doubts in the beginning, since the first thing I saw was a magazine that had a nasty word on it.

Binga didn’t care about any magazines. She just wanted to see what was in the bag.

It turned out there was lots of stuff. 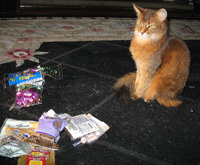 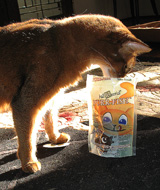 And some of that good-tasting brand of dry food that my human bought once and then never brought home again. Binga wanted to dive right in.

I was more polite about it. 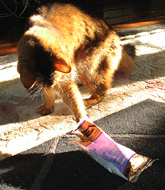 I thought the cat toys were kind of lame, but Binga liked them. 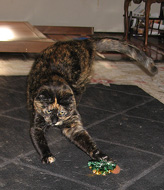 There were also dog treats, which did not impress me. 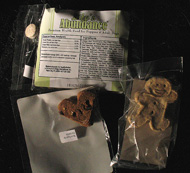 I hope this shampoo is for the dog, too.

There were a few human items, including this stupid looking thing. At first I thought it was a food dish. Luckily, it isn’t — it’s some sort of planter.

My human’s boyfriend got a goodie bag too, which meant double treats for us (yay!) and the dog (whatever). His bag had a dog planter. Binga hated it, even if she does like dogs. 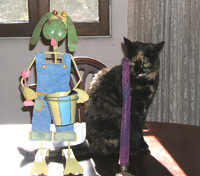 Oh yeah, and there was a lint roller too. It wasn’t very big. 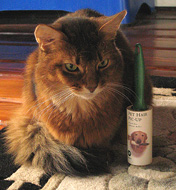 It’s been getting pretty cold at night, so instead of letting the dog sleep in the enclosed patio, my human’s boyfriend has been bringing her in to his music room for the night. He set out a bed for her. We cats think it’s wasted on the dog. 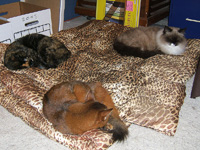