I wasn’t feeling right and couldn’t jump again so my human carted me off to the vet clinic where her boyfriend works. It’s located somewhere called “the West Side,” which is a long way from my house. Not only was the drive annoying, my human insisted on passing the time by listening to some of her stupid music cassettes from what she refers to as “the old days.” Apparently her car only plays cassettes, not the disc thingies. In any case, it may have made the drive better for her, but it did absolutely nothing for me.

But whatever. After all that time in the car, the head vet at her boyfriend’s clinic couldn’t figure out what was wrong, either. He said I checked out okay, and to just finish the medicine the other place gave me. So that’s what we did and I’m feeling much better now. My human was relieved. So was I — she started calling me a “ground squirrel,” which I found really, really insulting.

On top of being sick, I’ve also discovered there’s another cat living here! It’s very strange, though — the only time I see her is when I’m eating my dinner in front of the new silver trash can in the kitchen. She never seems to be anywhere else. I don’t really like her, but I guess as long as she has her own food, I don’t mind.

A couple of exciting things happened this month. First, the old electronic litterbox stopped working, so my human bought a new one. 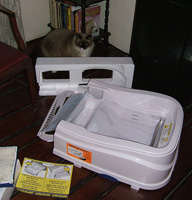 But that’s not the best part. What we cats really liked is the humongous box it came in!

The other really thrilling event was Thanksgiving. This year the humans had it here! That meant we got to have turkey. It was quite exciting. I’d never seen a whole turkey before. 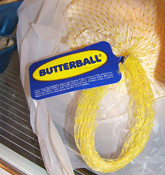 Because some couple was coming over — the guy was apparently related to my human’s boyfriend — my human thought it might be nice to turn on the big watery thing out on the back patio. It’s called a “spa” and I’d never seen it with the cover off. It was kind of scary. 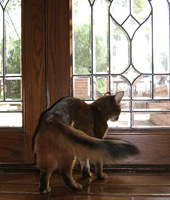 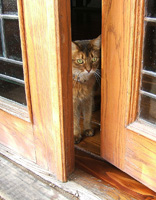 My human seemed to think it was scary too, because she got kind of freaked out when she couldn’t figure out how to turn it off. Nobody wound up using it anyhow. I’m not sure why anyone would want to sit in a bunch of churning water. Sounds like recipe for disaster, if you ask me.

Back in the kitchen, Binga was cooking up her own recipe for disaster. 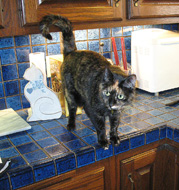 My human kept having to throw her off the counter. Both she and the dog kept hanging around. 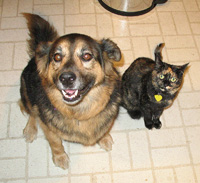 And who could blame them, really? I mean, how could anybody not find this irresistible? 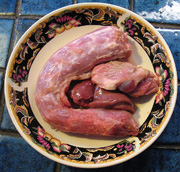 Once she cooked all of it, she let us have some. Unlike Binga and the dog, I’m a lady. I insisted on having mine at the table. 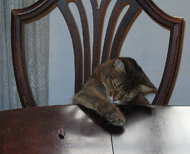 My human tried to make the table look festive with a cheap centerpiece but it wouldn’t sit up properly. Typical.

I think I make much better table decoration. 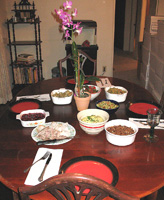 Unfortunately my human didn’t agree, and the couple that came over brought a plant. They also brought over more food, none of it meat. My human thought this was great, but I felt it was pretty useless.

So finally the humans sat down and ate. But they had to keep an eye on Binga the whole time. She took every opportunity to get into trouble. The really stupid thing is everybody made such a big deal over her, just because she was friendly in addition to being nosey. I allowed the visitors to pet me a couple of times — that was way more special, in my opinion. Boodie mostly kept her distance. That was her loss, because it meant she missed out on the turkey.

Now my human’s back to making me help her sell stuff on eBay. As you can see, I am far less than thrilled. 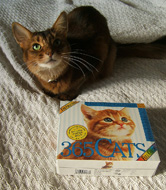 More exciting is my new book! It’s three years’ worth of my advice column, and more. Now, that I don’t mind posing with.