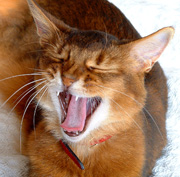 Well, this has pretty much been a lousy month. It started off on a really bad note when I looked out in the back and saw that our brand new box had been thrown into the recycling bin.

Then there was the cricket issue. I love crickets — they are fun to catch and tasty, too. But whenever my human sees me with one, she takes it away if it is still alive. Like this one, for example — it was freaked out, but it was still moving, so it got put out onto the balcony. What a waste of a delicious snack!

So can you blame me for taking my aggressions out on Binga? I mean, she is always trying to boss me around anyway, so I just give her as good as I get. 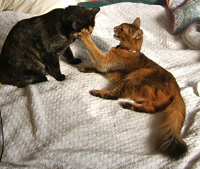 I usually don’t let her have it outright, though. I generally just do something that annoys her, like mess with her tail. 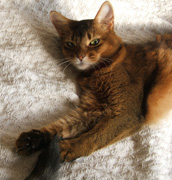 All of this puts her in a bad temper. And then the humans make is worse by doing stuff like changing the bed sheets. Personally I like the winter bed sheets — they are flannel and comfy. But Binga hates it when anyone messes with her bed… get that, her bed? That’s a real laugh!

Note the hole in the box springs. That’s Binga’s work. I am not responsible.

Then Thanksgiving came and my human decided to do another horrible holiday photo session! At first I thought it wasn’t going to be all that bad — she pulled out some cardboard banner while I was taking a nap. While I did have to wake up I didn’t have to move.

That is, unless I wanted to. 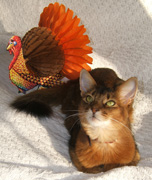 I could have done without the rest of the session. First there was the idiotic cartoon turkey she made me pose with.

I seriously wanted nothing to do with this foolishness. 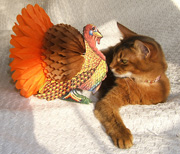 Then she pulled out some “festive” fall garland, but I was done. I refused to have anything whatsoever to do with it.

You won’t believe what happened next — my human decided that since I was being such a “prima donna,” as she called it, she had Binga pose with the garland instead! And Binga decided to show me up by posing all nice. She didn’t even try to eat it.

My human had one more “party garland.” Note what the label says.

Apparently the “and more!” part meant Boodie. (I had already walked out on the photo session.)

Boodie even did a fair Maneki Neko imitation.

Of course, she has to taste test every prop. 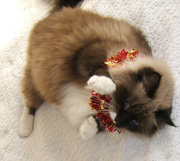 After all this hard work, do you think any of us cats got any thanks whatsoever? No! Thanksgiving came and went with no turkey for us. The humans went somewhere else for dinner and came home late. We didn’t even get fed until they came home. What a gyp!

To atone, my human spent time with me and my favorite feather duster. I played with it until I fell asleep… dreaming of a home where I get turkey and crickets every day and no photo sessions whatsoever.