Maybe it isn’t so bad here after all. I didn’t even notice this the first couple of days, but afterÂ a while it dawned on meâ€”this place is full of kitty toys! You name it, they’ve got it hereâ€”little fluffy balls, plastic balls with bells, poles with toys on strings hanging off them, sparklyÂ mice toys and other creatures. They even have a toy batâ€”for some reason, no one but me likes the bat. 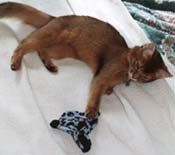 But my favorite toy looks like a little feather duster. In fact they have two of them here. I couldÂ play with them for hours… and I do! 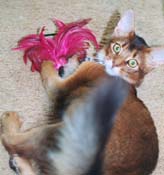 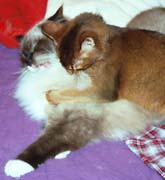 The other great thing about living here is that Boodie has decided we can be friends, so we hangÂ out all the time. She even lets me attack her and beat her up. Binga beats her up too. My human callsÂ Boodie the “kitty punching bag.” Maybe it has something to do with her being a fosterâ€”she tries harderÂ to make us like her.

Binga still hasn’t decided if she likes me or not.

She still has her unpleasant moments.

She slaps me now and again (usually at mealtime), but I’ve already made it clear that she can’tÂ beat me up the way she does Boodie.

The meeting place for all the cats is the king size bed in the master bedroom. We hang out thereÂ all the time, sometimes under it, but usually on top of it in the afternoons, when it’s sunny. 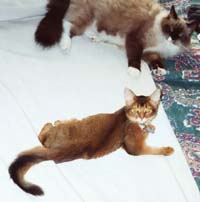 Living here does have a couple of drawbacks, though. That Sushi dog is one of themâ€”she’s way tooÂ hyperactive. And I hate my collarâ€”the first time my human put it on me I did a few somersaults tryingÂ to get it off. Unfortunately that didn’t work. It’s a cheap three-dollar thing from the market and myÂ human refuses to get me a better oneâ€”she says I’ll grow out of it and it’ll be a waste of money.

But the really strange thing about living here took me completely by surpriseâ€”I’m expected to do tricks!Â I don’t know whatever got into my human’s head, but she’s really into making all the cats do tricks,Â like it’s not good enough that we just hang out and look great. I found out about the first trick atÂ mealtimeâ€”she expects us to sit up for our dinner! The other two cats are used to this odd ritual.Â Binga, in fact, will sit up for any reason. She gets treats between meals for sitting up.

Even Boodie sits up for a Nutro Gourmet chunk. 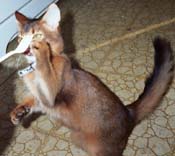 I don’t know about this sitting up thing. I’d rather just grab the stupid fork and pull off theÂ chunk of cat food. “It’s a good thing you don’t have opposable thumbs,” my human says. “Otherwise we’dÂ really be in trouble.”

The other trick we have to do is the “balance beam”â€”we’re supposed to walk on the upstairs railingÂ for a treat. Actually Boodie doesn’t do this oneâ€”she doesn’t have the figure for it. Lucky. Binga,Â as usual, is the one who excels. Occasionally, she’ll just jump right on the railing and start walkingÂ on it, hoping to get that treat.

I’m not so sure about this balance beam thing. 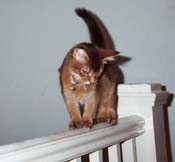 It’s not the heightâ€”it’s not all that high for a cat. I just think it’s kind of dumb. I’d rather go play with the feather duster. Or sit on the bed and gnaw on the blanket when I think no one’s watching. 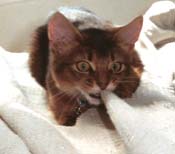