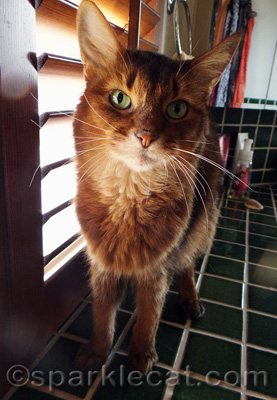 You know how everybody is talking about how overweight many cats are? Studies have shown that over half of all housekitties weigh too much! Well, we do not have that problem here. Binga and Boodie are both in a normal weight range for their size. They are actually pretty large cats in length and height, and they both weigh between 10 and 11 pounds. Sometimes Binga weighs a bit below 10. Boodie looks big, but she is actually mostly fluff — underneath it all, she is not much bigger than Binga is. On the other hand, my human tells me — frequently — that I am underweight and need to eat more! I actually like food and am often hungry — I just don’t like any food for very long, and my human has tried everything! My tests at the vet don’t indicate anything that might make me skinny, so it is something of a mystery.

Usually I get weighed on a used baby scale that is missing a part, but my human’s boyfriend has a scale for himself, and when I stepped on it, my human discovered it can weigh kitties too! 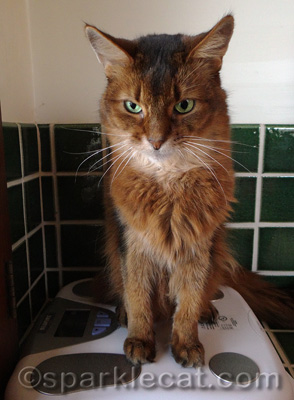 It said I weigh 5 pounds and 2 ounces. With all the pet obesity that is going around, I do not know why my human is complaining. I am happy and playful most of the time and I hear the camera puts on 10 pounds. So technically, that means I weigh 15 pounds, right? Maybe I need a diet!

By the way, if you are wondering what Binga and Boodie do to maintain healthy weights, my human only feeds them canned, grain-free food and they are strictly portion controlled. The amount of food they each eat is 5 ounces or less a day. And they do not get treats very often. Binga complains and tries to steal food sometimes (and believe me, she is never late for dinner!), but my human ignores her. I get treats whenever I want (and boy, is Binga jealous!), so maybe I should not complain about my human wanting me to weigh more!