You are here: Home / Diary / My Weekend at the Cat Show 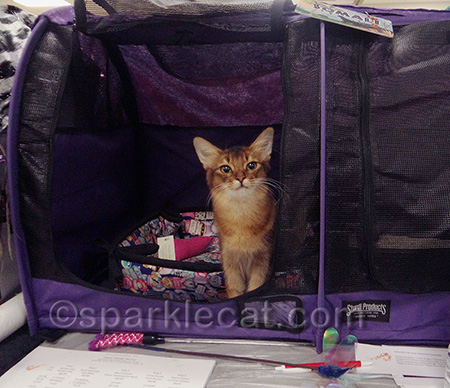 I bet you are all wondering how things went at the cat show! It was lots of fun. There were five “rings” each day, for a total of 10 rings. A ring is a bunch of cages surrounding a judging table. The cages are where the cats wait to be judged, once they are called up. When I wasn’t being called up, I mostly hung out in my Sturdi shelter. 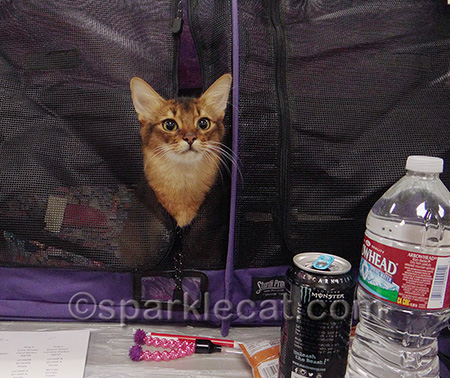 I stayed zipped up a lot so my human didn’t have to keep an eye on me all the time. I napped, and I was so relaxed that I flopped over on my back to snooze a couple of times. But when I wasn’t sleepy, I wanted out. And since I’m so good (in other words, I don’t go bolting off the table or get mad at the other cats nearby), I got to be out a lot. I got a quick touch-up groom before being shown in each ring, and I also practiced my facial expressions! It’s important to have a pleasing look for the judges. 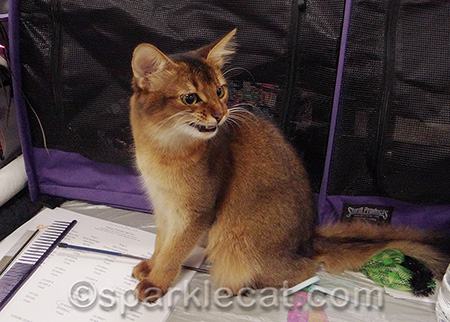 My human said this was not a good expression to have! 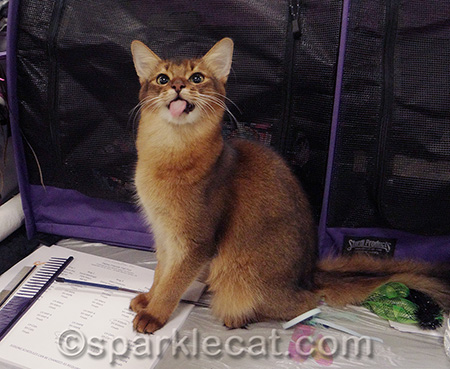 She also said the judges would not like to be given a raspberry! I think it would be fun. Everyone takes this judging thing so seriously sometimes. 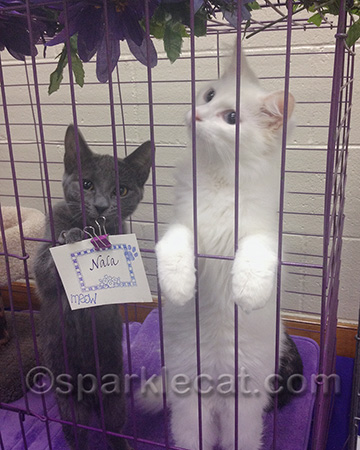 Often cat shows will also feature rescue cats for adoption. There was a whole row of them on Saturday from Hope to Home for Cats (they were also at the LA Feline Film Festival). My human loved these two kitties. The gray one wanted to come home with her. 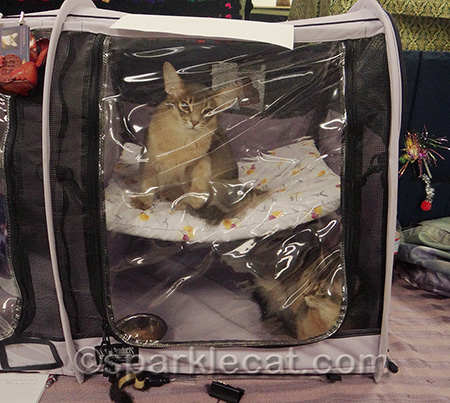 I thought you might like to get a quick look at my neighbors and fellow competitors. These two blue Somali boys (blue is a dilute version of ruddy, my color) had the cage next to mine. They were not quite five months old, but they were already bigger than me! They are also very handsome. 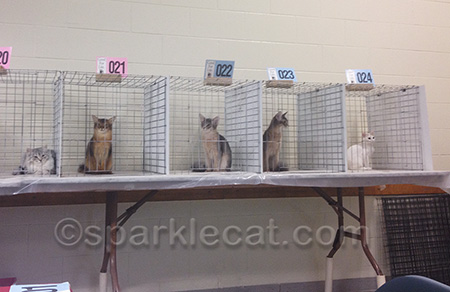 Here we all are, waiting to be judged in a ring. We were all being judged as Longhair Kittens. (That’s the way it is in TICA. In the other association I’m registered in, CFA, I’m considered a Shorthair because my base breed, Abyssinian, is shorthaired. Weird, I know!) I’m 21. The #20 kitty is a Siberian. The #24 kitten is a baby Turkish Van. He was just barely 4 months old and very cute! My human is hoping he gets shown more so she can watch him grow up. 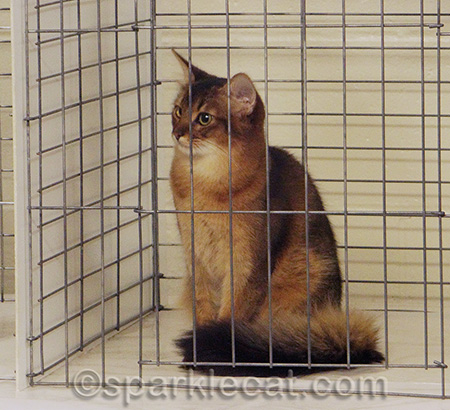 Being in the ring and waiting to be judged is the boring part because you don’t get to have toys and you aren’t allowed to play with the other kitties in the cages next to you… although some kitties try to break that rule. My human didn’t get photos of me being judged because it annoys the judges sometimes and she wants to stay on their good side. Maybe next week, when I go to Las Vegas for a show there, my human will find someone to take photos of me on the judging table!

So here is how the whole judging thing works. You compete against other cats or kittens of your breed, and the ones who place highest for each breed might get considered for a final, either an Allbreed final (short and long haired) or Specialty (just shorthaired or just longhaired). 10 kittens finaled in each ring for Allbreed, and the couple of specialty rings this weekend had 6 kittens finaling. In this show, there were a total of 47 kittens entered — 24 longhaired and 23 shorthaired (although a couple dropped out along the way). 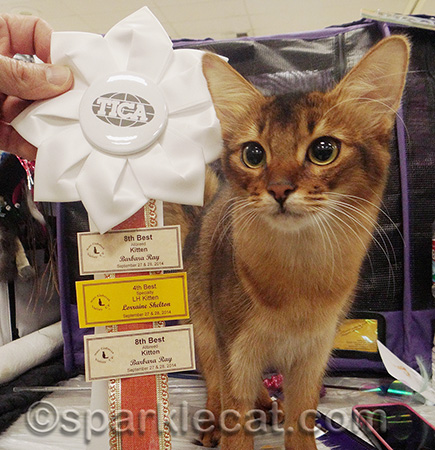 And here is how I did! Out of the 10 rings, I got first place Somali kitten four times, and was a finalist three times! The same judge gave me 8th Best Kitten two days in a row, and one specialty judge gave me 4th Best Kitten! So I did pretty good!