You are here: Home / Diary / My BlogPaws Adventure! 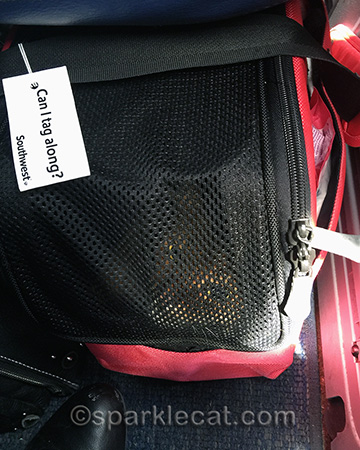 So after yesterday’s selfie, I was put back in my carrier and my human and I boarded the flight to Nashville. My human gave me crunchy treats to help me with ear pressure when the plane took off and landed. 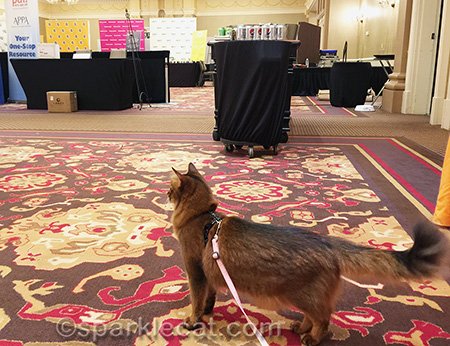 We arrived at BlogPaws the day before the exhibition hall and Cat Style Lounge opened, but my human needed to drop off a couple of books to Kate Benjamin at the Cat Style Lounge, so I got a sneak preview! 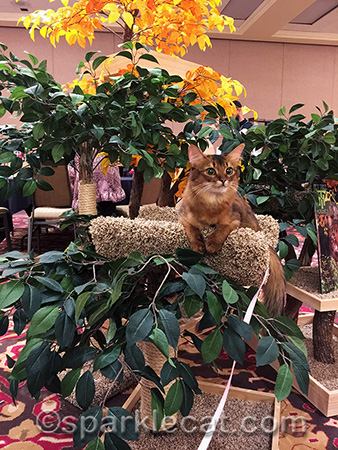 This cat tree TREE was possibly my favorite thing in the whole exhibition hall! 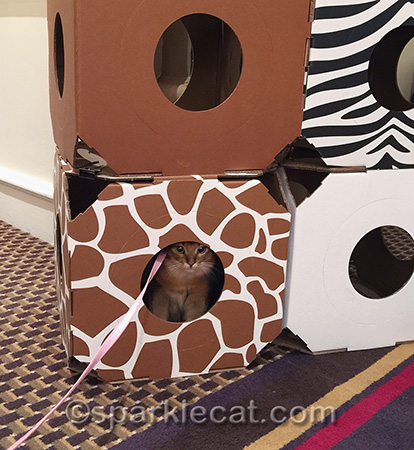 These cubes were pretty fun too. 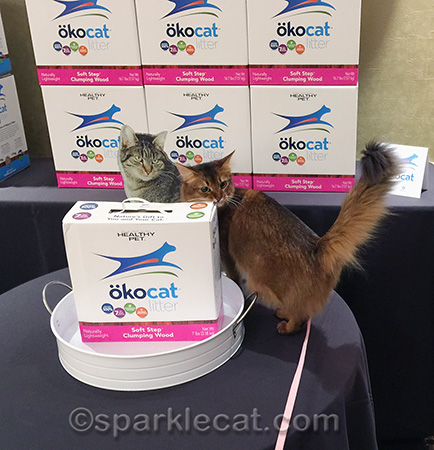 That’s not a real cat next to me — it’s a flat cat. There were lots of those here! Too bad the litter wasn’t opened up and poured until the next day. I wanted to review it. 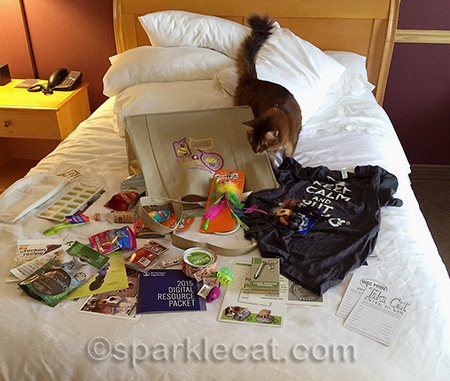 The next morning, my human picked up her badge (I didn’t need one) — and the awesome cat swag bag! Since this is my first BlogPaws, I don’t know what went on before, but my human says this is the best bag of cat items ever. Of course, I will be giving away much of it on Cat World Domination Day (yes, I am having it this year!). 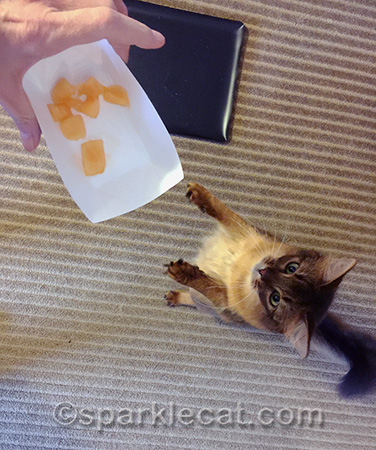 Then my human gave me breakfast and had brunch (I hear it resulted in a blog post I will be doing in a couple of weeks), and she brought back some cantaloupe for me. I wasn’t expecting this special treat! 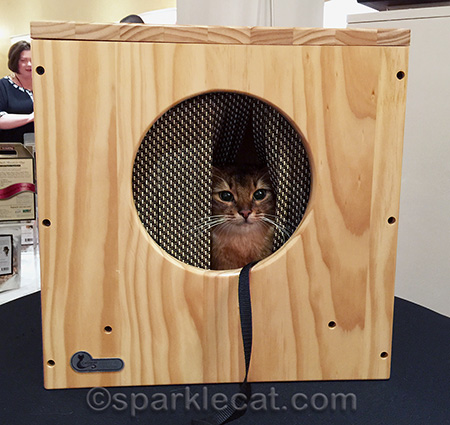 Then it was back to the Cat Style Lounge to check out more cat products! 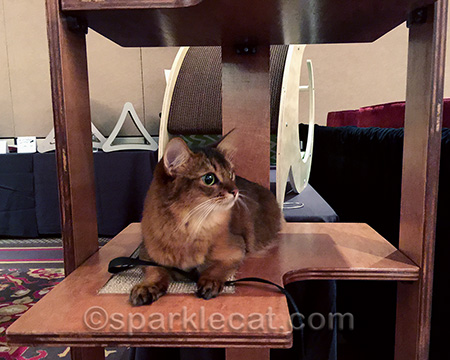 I think I tried out all the cat trees and towers that were there! 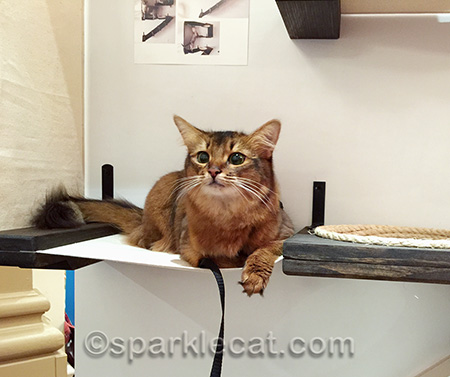 This wall piece took some getting used to because I’d never seen anything like it. 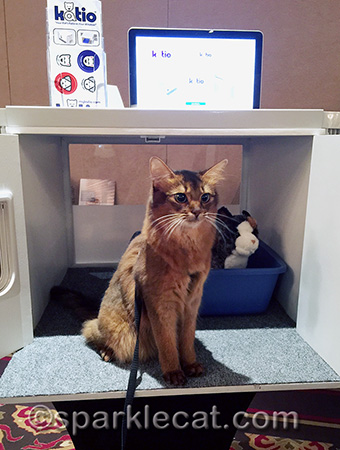 I liked the Katio right away. But I’m used to show cages and enclosures, so that is probably why. 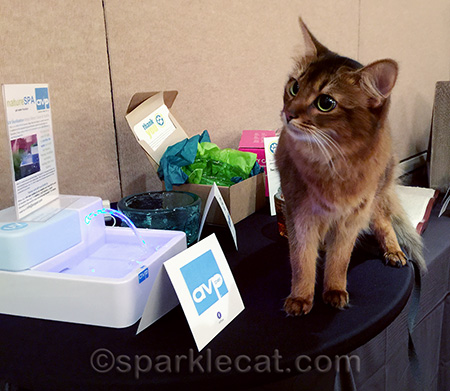 Don’t tell anyone, but I took a sip out of this fountain. I don’t know if I was allowed. 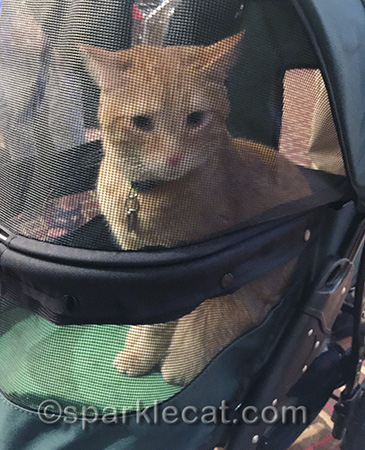 There were other kitties at the conference too! Katie and Waffles were there, but I didn’t meet them — my human didn’t want to stress them out, or possibly me either. Then there was this guy in the stroller. I’m not a stroller-type kitty — when I was out and about, I was in a sling so my human could keep me close. 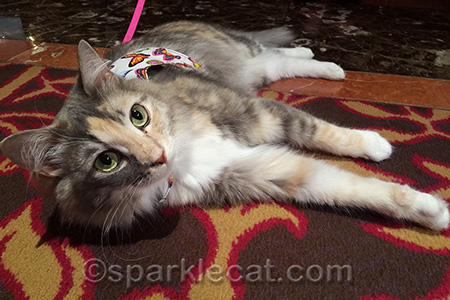 My human does not like to play favorites, but she fell in love with Sophie! (And to be honest, she was already halfway in love with her from the blog she is part of, Kitty Cat Chronicles.) Sophie has a mild-to-moderate case of cerebellar hypoplasia, but that does not stop her from going places and having lots of fun! She spent a lot of time hanging out at BlogPaws, either in a sling or on a leash, like me. In fact, we even met each other and touched noses while we were in our slings! 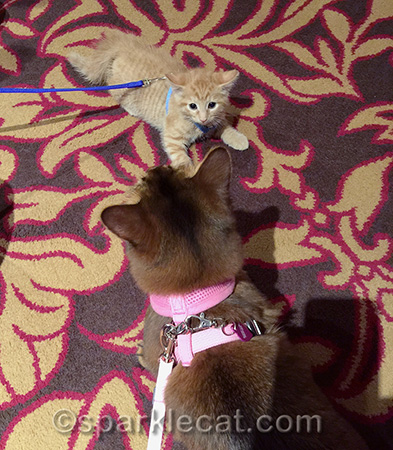 The Random Felines human brought some of her fosters and I got to meet Queso, but he didn’t like me! I guess he thought I was some huge, scary monster cat, even though I was perfectly nice and calm around him. Plus, I am only 7 pounds. There were other cats there too, including Coco the Couture Cat! But I only saw a little bit of her, and none of the others. 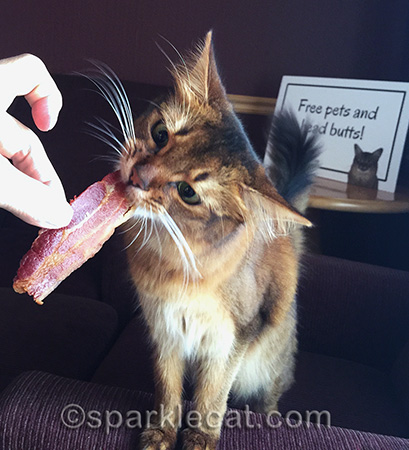 I started the next day with a healthy breakast — and bacon! My human brought it up from her own breakfast and I was so excited. It was my first time having bacon, since the humans don’t eat it, and it was delicious. 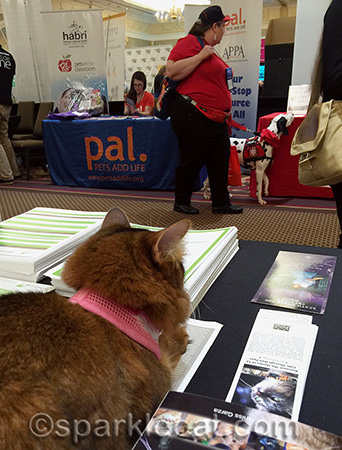 This was a big day for me because I had to help my human work the Cat Writers Association booth and help her sell copies of Rescued. I sat on the table and helped draw people in! Since we were out in the main part of the exhibition hall, there were lots of dogs wandering around (I hear there were something like 100 dogs there!), but I wasn’t bothered by them. 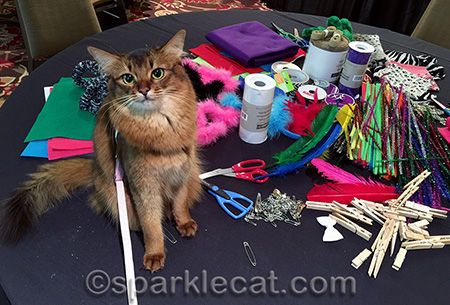 It was a good thing I didn’t mind the dogs because I was surrounded by them later that night when I competed in Pawject Runway! It was sponsored by Only Natural Pet and Vetriscience and three kitties (including me), one rat and a bunch of dogs had to wear costumes created by our humans in just 10 minutes! 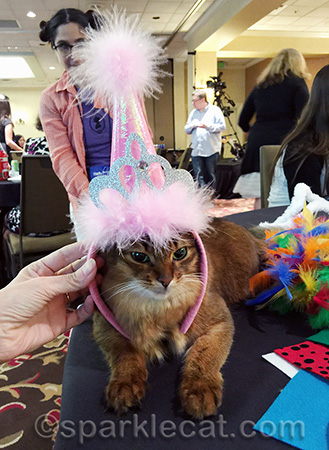 I’m glad my human scotched this idea early on. 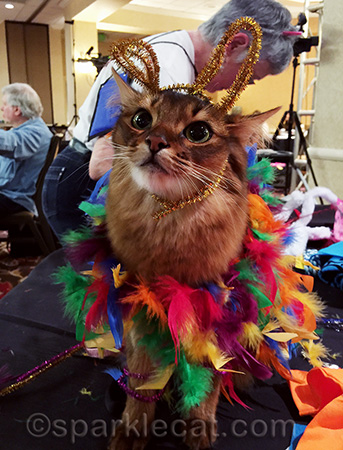 Although I am not so sure about what I did end up wearing! I am not sure what my human was thinking! It was the goofiest outfit ever, but you know what? I won for Best Diva, and got a $100 gift card from Only Natural Pet! I really think I won because I actually walked across the stage. If you want to see, you can go here. My human managed to find the clip with my walk because the video of the whole event is very long and not super exciting.

One of my favorite feral cat rescues, Kitty Bungalow was there with one of their cats, Kissie. She didn’t win one of the gift cards, so I donated mine to them. 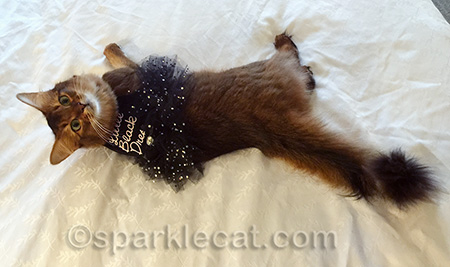 But I wasn’t done! Later that night, my human and I had an after dinner party in our hotel room, with champagne! I dressed for the occasion. I want to mention that all the humans who attended were well-behaved, and no one tried to abscond with me (although there were threats). 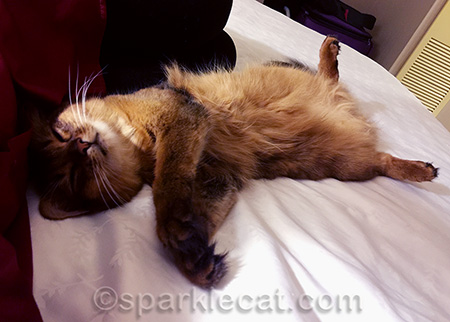 I had a great time, but I was exhausted! We flew home the next day, leaving early because my human had been worried that I might not enjoy myself. She says that if she knew how well I would handle everything, we would have come earlier and stayed later. We are already registered for BlogPaws 2016, in Phoenix!