You are here: Home / Diary / My Amazing Winner!

Here are Boodie and I to announce the winner of the Cat Amazing Cat Toy! Unfortunately, Binga could not join us, mainly because she wouldn’t stop trying to get the treats out of the holes long enough to help! My human finally had to put her in a room downstairs so we could do this.

And the winner is…

Tania’s kitty, Sammy, is a Somali like me and I will tell you something about us Somalis — we use our paws like hands. So I bet Sammy will have a blast with this toy!

Boodie also wants to remind Sammy about the treats. That is her favorite part!

I also wanted to mention that last night, my human was uploading my blog post at 2:30 A.M. and she forgot a couple of blog friends that I wanted to give Blog of the Year awards to! Can you believe it? I don’t know what is wrong with her — I am awake and ready to play at that hour! Anyhow… one, The Daily Abyssinian, said they wanted it, which jogged her memory, so I am giving it to them now… and they passed it along to the other blog that escaped my human’s brain, The Poupounette! Meanwhile, I got a star back from my Aby friends, and Oui Oui pointed out that they too had given me the award last week, totaling five! 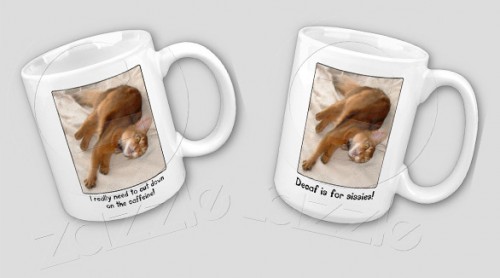 Lastly, I wanted to mention that I have a couple of new mugs for cat and coffee lovers at my Zazzle Store! My human put them up yesterday because Zazzle was having a sale on mugs. Lately, she has been making new items as Zazzle announces sales and coupons. This is fine with me, as long as she doesn’t forget who I am giving awards to again!