You are here: Home / Diary / My Most Challenging Therapy Visit Yet! 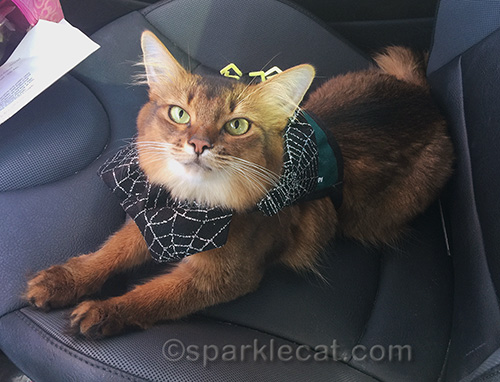 I had a very big therapy visit today! My visits up to now mainly involved going to a hospital and visiting with one patient and maybe their family. But this time, I went to a school for children with intellectual and developmental disabilities. There were six different classrooms, two each of elementary, middle school, and high school kids. In each classroom, I spent 15 minutes visiting the kids who wanted to meet me. It was quite a morning!

The children had many different levels of ability and cognizance. Most of them were happy to meet me. Some needed help petting me, and they probably got more out of just touching me than really interacting with me. A few kids were frightened of me! But after watching everyone else touching me and seeing how polite I was, most of them wanted to pet me.

The adults and my human were all very watchful to make sure the kids were gentle with me and nobody harmed me. Some kids didn’t know how to be gentle, but they weren’t mean — they just didn’t know better, and maybe didn’t fully understand I was a living creature. So the grown-ups worked with them, sometimes holding their hands to touch me nicely so they could still experience me. Same with the kids who couldn’t use their arms and hands well — with a grown-up’s help, they could still experience the softness of my fur. One boy wanted to grab me, and my human leaned against him in a way so he could still feel me, but not grasp too hard.

The last classroom was middle school kids, and one of the newer boys had a meltdown, screaming that he was allergic and hiding from me! The grownups put my human and me in a different part of the room for the other kids while they worked on calming him down. By the end of my visit there, not only had he calmed down, he wanted to meet me! But he wasn’t allowed to touch me. Later on, we found out that at most he is mildly allergic to dogs and cats… he was just having a bad moment.

It was a little bit scary being faced with so many unpredictable children in an hour and a half, but I hung in there and did not try to run away. In fact, most of the time, I just sat with the children and my human. I knew that if I felt insecure, I could lean on my human and she would protect me. I was even brave enough to eat treats out of a couple of children’s hands, and I did a high five in one classroom. I was pleased to hear that quite a few of the kids had kitties at home. 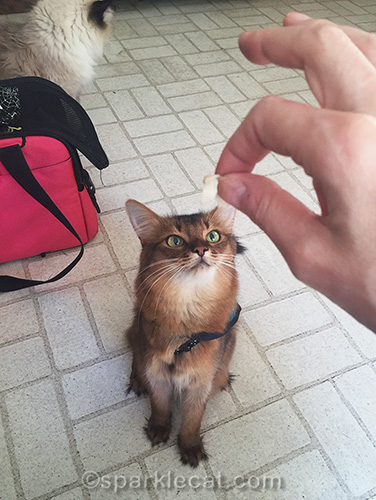 I will tell you something funny: when we got home, my human was drained but I bounced right back! Because I was such a good kitty, I got a special treat: some turkey from a sandwich my breeder gave my human over the weekend! And I got told over and over again what a great job I did.