You are here: Home / Diary / More Healing Purrs for Kids 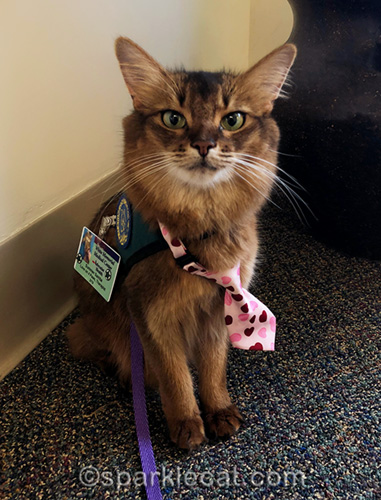 I had such a nice therapy cat visit. The other team was my St. Bernard galpal, Clementine. She’s super easy going, so we visited patients both separately and together.

We started off with the adults in the east rehab wing. The patients I visited all spoke mostly Spanish. We did need help talking with one older woman, who was hard of hearing, but I think my human’s Spanish is getting better. Once the hard of hearing woman understood that I was a visiting therapy pet, she was really happy to have me hang out with her.

Next up was pediatrics on the second floor. Clementine and I visited the playroom first and that was lots of fun. There was a boy at one end of the room, and a little girl at the other, so we were able to visit different kids and switch up after a while. The little girl really liked me and wanted to take me home. Her mother told her that wasn’t possible, but I don’t think she totally understood. She petted me a lot and although her mother kept reminding her to be gentle, she really wasn’t all that rough. The boy was really nice too. There was another boy, who had something going on with his legs, so he couldn’t walk very well, but he was able to stand and pose for a photo with me on one side and Clementine on the other.

My favorite pediatrics patient was a little girl who was heavily sedated but wanted to see me anyway. She loved cats but her father is allergic and she couldn’t have any, so visiting me was a treat for her. I laid down next to her and gave her healing purrs and made happy paws while she petted me.

We finished up at the Rainbow Room, where they see outpatient children. We got there a little late so there were only a couple of kids there. One of them was an older boy who was having a wild tantrum. My human felt bad for his mom, who was pretty helpless. It wasn’t a situation like a regular kid, where you could just be a little short with him and remove him. He had some sort of developmental disability, so that complicated things a lot. During a few moments when he had calmed down a bit, went lurching in my direction, but much to my human’s relief he decided he’d rather hug Clementine. She’s huge and was much better able to handle a boy of his size. There was also a little girl whose face lit up when she saw me.

In case you are wondering what I did while the boy was having his tantrum… I didn’t do anything. I just sat there. Didn’t even flick an ear. After he got called in for his appointment, my human had me do some tricks to keep me busy. Children really don’t bother me, even when they are doing something loud or being temperamental. I don’t think that’s something a therapy cat learns. You either have it or you don’t.