You are here: Home / Diary / A Meditation on Bugs and Humans 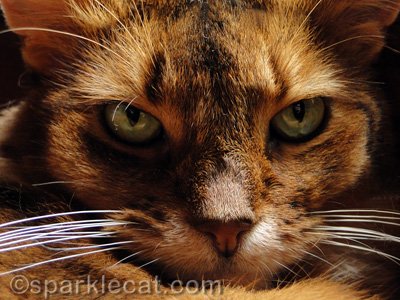 I am quite jealous of Boodie right now. Look at what she found: 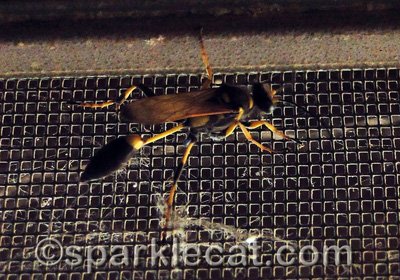 The photo isn’t the best quality because my human trapped it between a window and a window screen. Now she is trying to figure out how to get it outside with the “least amount of drama.” But the bug (a thread-waisted wasp, to be exact) got me to thinking about the different attitudes cats and humans have about bugs.

Okay, so some of them aren’t too good. My human kills black widow spiders if she finds them near the house — apparently they can kill a kitty if they get inside and we try to play with them! And some bugs sting, like bees, and I guess that wasp (which is a bummer, because it looks like a fun toy). But humans treat all bugs like they are bad! And I guess for humans that is true, because every time they “catch a bug,” they get sick. Which makes me wonder: why do they go catching and eating those bugs in the first place? And just because bugs make them sick, why does that mean they have to take them away from us when we find them? Bugs don’t make us sick!

Humans are just so quirky and confusing sometimes.