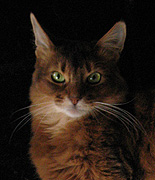 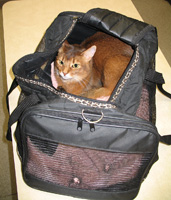 What a crappy month! It all started with a trip to the vet — and there wasn’t even anything wrong with me!

My human was concerned because every time we found a brand of food I liked, it got recalled, so she wanted to make sure I wasn’t getting poisoned. I was fine! I could have told her that.

And she keeps giving me new food and I hate most of it. She insisted I had to like this one brand because it had a picture of a Somali cat on the label. It was as yucky as everything else. I let the other cats have it. 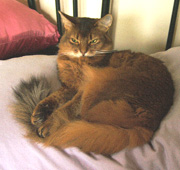 And you’d think that even if my human can’t give me any decent-tasting food, she’d at least allow me to sleep where ever I wanted but no! Well, the first place that was deemed off limits wasn’t her fault, really. It was her boyfriend’s pillow, and he was the one who complained.

So I decided to nap on a box full of his clothes instead. Hey, is it my fault he still has stuff that isn’t completely unpacked? 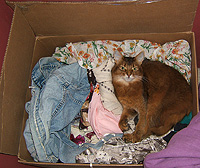 In an attempt to make me stop, my human threw the dirty comforter over the box (she’s too lazy to take it to the dry cleaners… seriously, how lazy can you get?). Actually the comforter was even cozier! 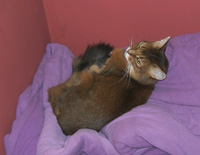 Boodie decided to copycat me by taking naps in every open box she could find. If that doesn’t get the humans to finish unpacking, after being here 8 months already, then nothing will. 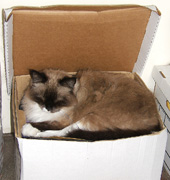 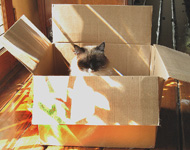 Boodie, as everyone knows, is the shedding machine. She has covered the living room rug very nicely. 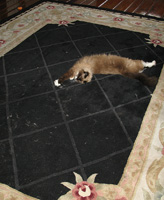 I don’t shed as much as she does, but I help in other ways.

You’d think my human would at least appreciate the great efforts we have taken to decorate, but instead she bought a new vacuum cleaner. I was horrified.

As you can see, we have our work cut out for us now. 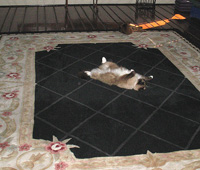 Then my human went on this art kick. She and her boyfriend went to some gallery one night and she came home raving about some guy named Mike Wodkowski who turned ordinary things like chairs and doors into art “statements.” The item she liked the most was a litter box — apparently it was a collaboration between the guy and his cat.

I can’t figure out why MY litter box doesn’t rate a gallery showing. Perhaps I need to get my human working on that. 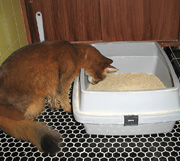 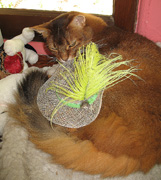 But the most annoying part of the month was yet to come. My human is friends with this girl, Inger Lorre, who is a singer and artist. She is doing a painting of me. That part is cool. But she also makes pet fashion and she let my human take home one of her designer items, me being a designer cat and all.

Trust me, a modeling career is really no fun. Style is pain.

My human said that if I was going to be uncooperative, then she’d let the other cats model. I don’t think Boodie was too thrilled.

Actually Binga knows how to wear a hat. I was quite surprised. That said, I don’t think she has the temperament or looks to be a real, high-fashion supermodel. Character shots, maybe.

There’s only one cat here who has the grace and sleek good looks to really seduce a camera. And I don’t think I’m being conceited by saying that. I do have the goods.