Just so you know, Binga’s not scared of the fan anymore. 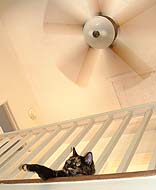 Things have been pretty dull around here. I’m already bored of that DVD my human bought us. I mean, watching mice on TV or humans doing yoga — it’s all the same thing, really.

The real problem around here is that I don’t always get the respect I deserve. For example, Binga just knocks me off the cat tree whenever she feels like it.

Sometimes she really gets on my nerves. And she hangs out with that dog, too &dash; it’s really disgusting!

My human was beginning to worry that we cats were getting bored. She worries about that because it means we may start causing trouble. She doesn’t realize that we don’t need to be bored to cause trouble. Anyway, she decided that perhaps some more toys would interest us. But, like usual, she wanted to be cheap about it. She thought maybe we could use one of her boyfriend’s castoff guitar strings as a plaything.

It was the weirdest piece of sushi we ever saw, because it had no scent.

Then we found out why — it was a wind up toy. Believe me, that was a big disappointment. We would have preferred real sushi. Boodie and I felt gypped.

But finally, she got it right. Real cheap, but right — a two-dollar mouse on a plastic wire.

The only problem is that she doesn’t bring it out often enough. She thinks she has better things to do than play with us cats. And then she worries about us getting in trouble. Seriously, how can such a clueless person have wound up with as cute a cat as me?