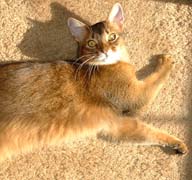 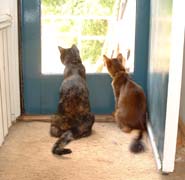 This whole balcony repair is becoming a long-term project! Binga and I have been keeping an eye on the workers to make sure they are doing a good job.

One guy never came inside and kept the door shut while he was working. That didn’t stop Binga from checking him out.

Eventually she woke up and took a look but by that time it was nearly done. 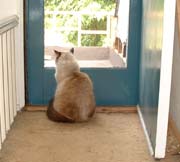 Since Boodie was awake I took advantage of the opportunity to beat her up. Every so often she needs to be shown who’s boss. 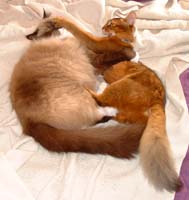 Finally the workers finished the balcony deck. I examined itâ€”it seems like they did a pretty nice job. 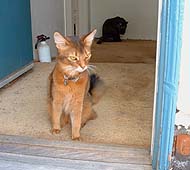 Of course, there’s more stuff to doâ€”the balcony part needs to be finished. And since the balcony was directly over the dining room, the rest of the rotten ceiling came crashing down when the first guy was banging around. That was a mess and it took a while to clean up. 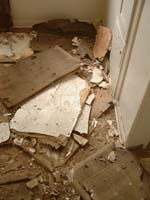 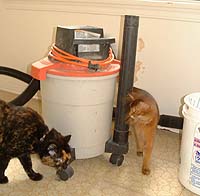 Binga enjoyed rolling around on what was left of the dirty residue. She didn’t enjoy getting wiped down afterwards. She’s lucky she didn’t have to get a bath.

Then some new guy came by and fooled around with the old dining room light fixture and the wires that were attached to it. I was fascinated by the ladder, but what really impressed me is that Boodie tried to climb up it. That’s the most athletic thing I’ve ever seen her do. 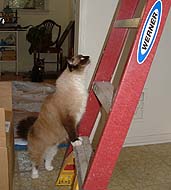 The past couple of days I’ve been hearing my human talk about something called a “refi.” From what I gather this means there’s going to be more stuff done around the house. That means there will be more workers for me to watch. Frankly, I think they look best upside down. 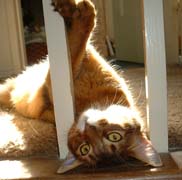