Back in Charge, Mostly 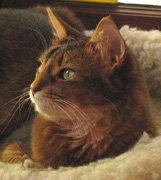 Now that I’m feeling so much better, I’ve taken charge of the house again. My first duty was to make sure that the dog remains outside, in the back, where she belongs.

I also decide when my human can exercise… and when she can’t. 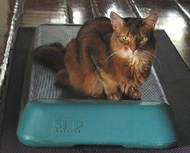 I’ve even trained her to give me my food on top of the cat tree, far away from the other two food-stealing cats. 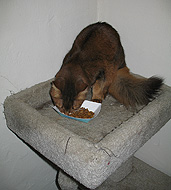 Unfortunately, Binga refuses to acknowledge my superiority and now she’s always on the cat tree in case I might have dropped something tasty. 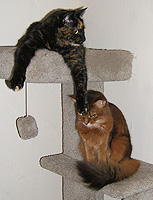 Binga thinks she can go anywhere and do anything. Shortly after this picture was taken, she was forcibly removed from this box, which only goes to show how mistaken she is.

I usually have my human under control, but she doesn’t always realize where she is in the chain of command here. Like I’ll be napping and minding my own business and she’ll decide to mess with me by sticking one of those gawdawful toys in my cat bed.

She thinks there is even more humor in numbers. She has no idea how annoying she is!

She redeemed herself, however, when she started doing her annual “tax” thing. This time, she did it in the upstairs apartment — she said there was more room to spread out all the papers. I did my part by marking the accordion file and claiming it as mine. 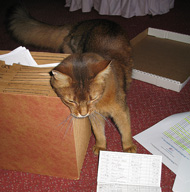 Then we discovered my brush! I haven’t seen it since the old place. I made my human take frequent breaks so she could brush me. 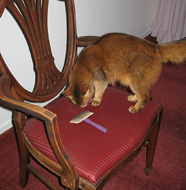 When I got bored I hung out in one of the upstairs bedrooms and sunbathed. 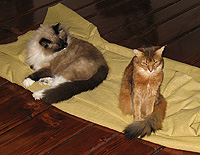 For months there’s been this thing sitting, rolled up, in the living room. None of us cats were sure what it was. We all tried lying on it at one point or another. Boodie thought it was okay, but to me it seemed rather useless.

Finally we discovered what it was — it’s a big sticky mat for a rug. We found that out when some guy showed up with one. 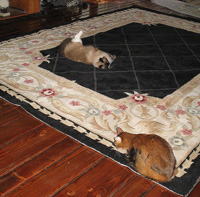 We all thought the new rug was fascinating. Boodie immediately flopped down on a corner of the black patch to take a bath.

After sniffing the rug for a while, I decided I liked the plastic wrapping it came in better. It’s an excellent surface for relaxing. 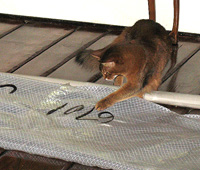