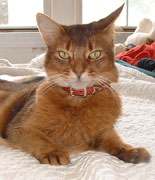 I finally got sick of wearing that dirty old collar so I took it off &dash; for good. My human got the message and didn’t put it back on. In fact, she let me “go nekkid,” as she put it, for a few weeks.

Both my human and her boyfriend had to do their tax thing this month. My human’s boyfriend spread his out all over the dining room table and had headaches and was really frustrated for about a week or so. Because he was having such a hard time we cats were really good &dash; we just sat on his papers but we didn’t mess them up too much. 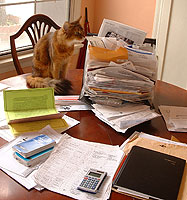 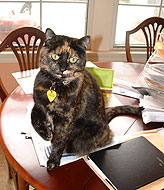 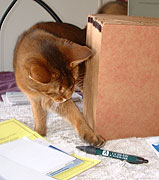 My human was more organized and a lot faster, mainly because she had already done most of the work. She still doesn’t have Quicken,

so once again she spread out all her paperwork on the bed.

I was especially fascinated by all the papers this year. My human couldn’t figure out why. I thought the reason was obvious. 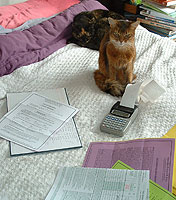 I figured that since my human had left my toy under all her stuff it meant she wanted me to play. That’s the difference between her and her boyfriend — she knows that playing with a cat helps alleviate stress. At least, I think that’s what she’s thinking.

It turns out my human owes more money to the I.R.S., so once again she pulled out more things to sell on eBay.

I was not pleased.

I don’t think she’s that good at the eBay thing — she only gets a few dollars for these auctions. She says that’s because there’s a glut on the eBay market for toys and she does better when she sells exercise DVDs. I think that’s just a lame excuse. 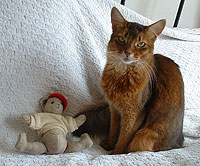 Remember a couple months ago she sold some stupid Curious George toy and said that for posing with it, she’d buy me a cat toy with the profit? Here’s all she could afford to get me.

I was interested in these “Catnip Dots” for about a fraction of a second. 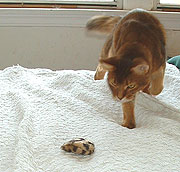 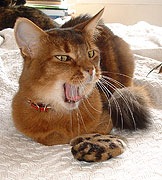 At least I did eventually get a brand new collar. 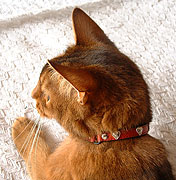 Of course my human made me model it. I’m just glad to have a break from those stupid stuffed animals. 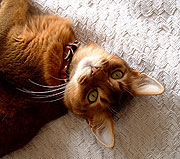