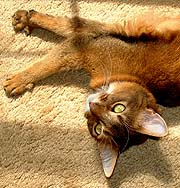 My human’s boyfriend did his taxes a few weeks after my human did, but he didn’t want us to help. He shut the door to his music room while he did the paperwork. That was very unfair of him. It turns out that my human is getting back more money than he is — serves him right. 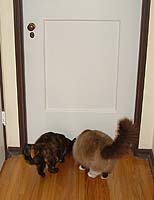 There’s been more activity going on around the house mdash; this time it involved this electrician guy and his helper. It started because my human hated all the ceiling lights in the whole house. They were all fluorescent and she thought they were ugly. She especially hated the one near the kitchen door. She said that was the ugliest one of all. And she had a hanging lamp sitting around for a couple of years that was supposed to go in the breakfast nook.

Since the house was so old, she didn’t want her boyfriend fiddling with the electrical wires, so she got the electrician guy to install the fixtures. While he was here he and his assistant also put in new wall sockets and switches. It took them a long time, and they kept leaving stuff all over the place. Boodie tried to check everything out.

Binga didn’t care about checking everything out — she just laid on whatever she could find. 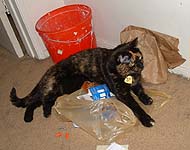 My human didn’t think the electricians wanted our help (what is wrong with these people?), so she put us upstairs. To keep us occupied she decided to brush us, but she only got as far as Boodie. The weather has been warm lately and she has been shedding a lot.

The electrician guy said whenever he saw Boodie walking around, big clumps of hair would fall off in her wake. No wonder — after she brushed her, my human said there was enough fur to make a hat.

So now I know what this thing is for

— it’s for all the Boodie hair that gets on everything.

The downstairs lights got installed. Frankly, I don’t think the new kitchen light is any better than the old one but my human likes it because she says it looks “vintage.” The breakfast nook light is definitely an improvement, though. 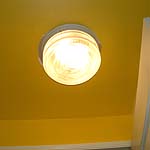 Finally the electrician guy began installing the new upstairs hallway light. Binga and I had to see what was going on. 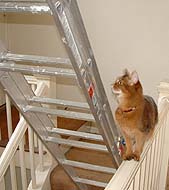 But as he got farther along, I began to feel more and more dubious about the whole project. 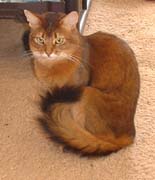 We were horrified when he was done — it was huge! And it spun around!

I’ve never seen Binga scared of anything, but this really freaked her out. She dashed downstairs and hid in the cupboard where my human has her exercise videos and DVDs.

That was obviously not a safe place to be — I hid under the bed.

Eventually, however, I started really checking it out. It is big and horrible, but it doesn’t look like it’s going to come crashing down — at least I don’t think so. I’ve even returned to walking the balance beam. A stupid ceiling fixture is never going to get the best of me! 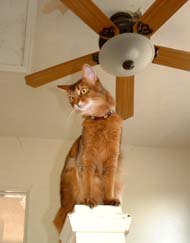