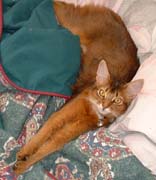 The month didn’t start off too well. I finally caught the toy mouse that was hanging inside theÂ Alpine scratcher. Of course I figured my human would fix it and put it back the way it was at someÂ point but she never did. And she wasn’t even impressed that I caught it. 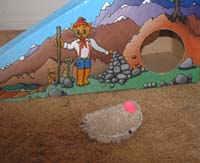 I also ripped the face off my bat and pulled out the stuffing. I thought I did a great job, but myÂ human only expressed disappointment. 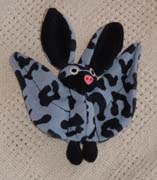 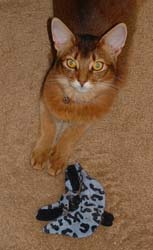 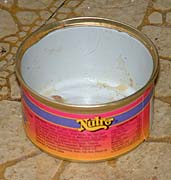 I am not in this picture because I was in the downstairs bathroom, being given a “time out.”

While my human was busy collecting the evidence of what she considered to be my misdeed, Boodie wandered in because she wanted to see the treasure chest. Definitely, Boodie is not too bright.

My human also thinks Boodie is fat. She’s always feeling around for her ribs under her fur. I think she is way too concerned with this, but she insists that it’s not healthy for a cat to be overweight. All I know is that my human reads loads of fitness magazines, but they never seem to have an effect on Boodie. Even so, she probably lost a couple of ounces after I switched over to the new kitten food. Now I clean my plate and there isn’t anything left for her to steal. 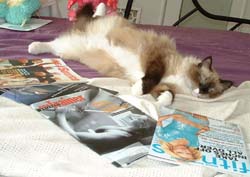 The most exciting thing that happened this month was that my human worked on something called “taxes.” It involved using this big file folder and spreading all these papers all over the bed. I guess there were already too many papers in her office for her to do this tax thing there. 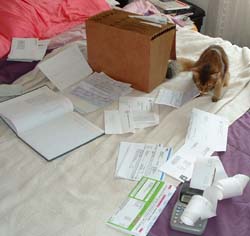 She spent hours and hours fooling with the papers and this little machine called a calculator. The first few times it went off, it made me jump. Binga likes the calculator.

I sat around and watched all this tax stuff. It went on way into the night for a couple of days. It went from exciting to mind-numbing pretty quickly. 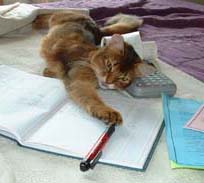 Part of my job as a Somali cat is to watch everything my human does, especially if it’s something new. I hope that in the future my human will find more interesting things to do than taxes.