You are here: Home / Diary / The Magic of Happy Paws 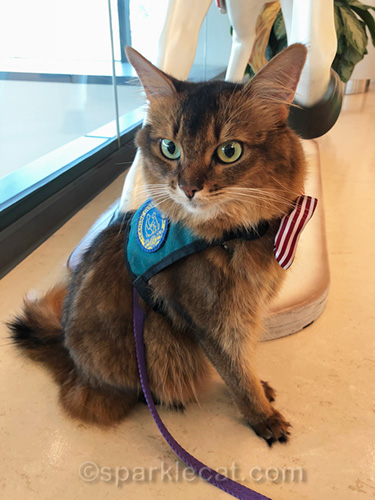 I’ve been a therapy cat for over two years now, but my human is still learning new things about me and how I work. This visit was to the childrens’ hospital near us. I’ve only been there a handful of times, and my human noticed I’ve never quite been on my game during these visits. She thought that maybe it was because she was bringing me in with my carrier instead of my sling. Because the hospital only has one team at a time, she thought we didn’t need the sling — she uses it to keep me above and away from the therapy dogs. But she thought maybe it served more of a purpose for me. So this time she brought it… and you know what, I was much happier! I was back to making happy paws and purring, and not fussing until the end, when I was tired.

Because I was acting more like my usual self, my human was also happier. Our first stop at this hospital is always the lobby, where I wander around and visit children waiting for appointments. There was a crowd of them around one table, doing some sort of activity, but they all stopped to surround me and pet me. Although one of the workers reminded them to be gentle, they didn’t need to be told, really. They were very well-behaved.

Next up, we visited the exam rooms, and there were quite a few of them occupied. The first one we visited had a teenage boy with his father. I sat down next to the boy, on his hoodie, which was sitting next to him. Then I got really comfy and started making my happy paws. What can I say, I’m a cat! Of course, I’m gonna lie down on a soft hoodie. He wanted a photo of me with him, and my human was happy to oblige. I visited some other children, and staff members too. The staff members really enjoyed seeing me, almost as much as the kids did.

This is the hospital where I get to visit pre-op patients. There was one for me today, and he was heavily sedated. I stayed in my sling for this visit. He petted me a bit, and I also spent time visiting with his mother and sister. Although they didn’t show it, I’m sure they were very stressed and worried about the boy, and I think my visit was really mostly for them. They took lots of photos with their phone during the visit.

Finally I went to the rehab room, where a boy was doing some exercises with a nurse. His mother and toddler brother were there. I visited with the little brother, and he was cute, and for a child his age, not too grabby. The mother was happy to see him interact with me because the cats at home avoided him. He was in a stroller when I visited, but I bet at home, he probably follows his cats and doesn’t give them much privacy. Well, that is just what toddlers do, so I was lucky to see him in his stroller! When the older boy finished his exercises, he visited with me. “We need another cat,” he told his mother. “No, we already have enough cats!” she told him. So I did not have to go home with them. (Not that my human would have let them have me!)

That was the end of my visit. My human always gives me the option to not go back to a facility if I don’t enjoy it. Because she hadn’t been sure if I enjoyed going to this hospital, this one was the deciding visit. And adding the sling made all the difference. There was no doubt that I loved coming there and I had a good time. So I will be back soon! 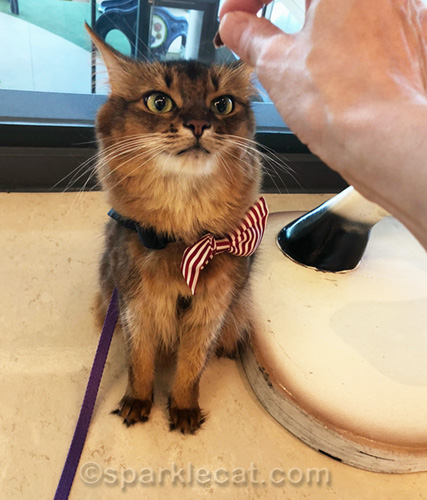 Oh… and my human did it again!