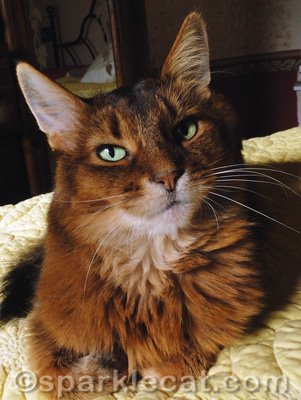 My pals Oliver, Ruby and Rose gave me the Liebster Blog Award, which I think is awesome because it gives me the chance to mention some cat blogs I enjoy that are either new or don’t have a lot of readers. When you get this award (liebster is German for favorite or beloved), ideally it should be given in return to five blogs with less than 200 followers. Most of those who have gotten this award have been a little loose with this particular rule, but with one exception I have tried to stick by it. Thanks Oliver, Ruby and Rose for this opportunity!

Here are my choices — please visit them, especially if they are new to you!

1. One Eye on the Future
I love Selina, the star of this blog. When she came to this multi-cat family some months ago, she was a rescue kitty whose plight had been blogged about by my very kind friend Brian. Being a black kitty with one eye, you would think no one would want her — but lots of humans wanted her! The lucky family who got her set up a blog for her and it is clear she has taken over the house. She has a lot of spunk and she has loads of fun telling you all about her life.

2. The Adventures of Spaz Cat and Wooly Bear
There was a very nice blogging cat in Melbourne named Oscar who got cancer and died last year right about this time. Many of us told him goodbye on his blog. Recently his humans adopted a pair of rescue cats, Otto (Spaz Cat) and Melrose (Wooly Bear). They are fun kitties and I think you will enjoy visiting them!

3. The Daily Abyssinian
This blog has been around for several years and from what I gather, pretty popular at one point, but somewhere along the way, it lost momentum. Perhaps that is because Gun-Hee, the young Aby who was the blog’s star, died tragically of FIP. But even with Gun-Hee gone, there were several other family cats carrying on, including one-eyed Aby Angel, and eventually Jake came along. Jake is definitely a take-charge cat. He’s quite a personality and he sometimes works as a therapy cat. Even better, his human did some research and apparently Jake and I are distantly related!

4. The Adventures of Scarlett and Melly
The relationship between Scarlett and Melly kind of reminds me of the one I have with Binga — occasionally fractious with passive-aggressive undertones… and sometimes surprisingly close. Although Scarlett was Cat Number One, sometimes she winds up playing second fiddle to Melly’s funny facial expressions. These two are very cool kitties, and definitely worth meeting if you don’t already know them.

5. Animal Shelter Volunteer Life
This is actually quite a popular blog already, but I wanted to mention it because it is written about kitties who have wound up at a Norwalk, CT shelter called PAWS. The main contributor, Meowmeowmans, is a very active member of the cat blogosphere, and has helped make the PAWS kitties highly visible. I wish all privately-run shelters had blogs with such dedicated volunteers.