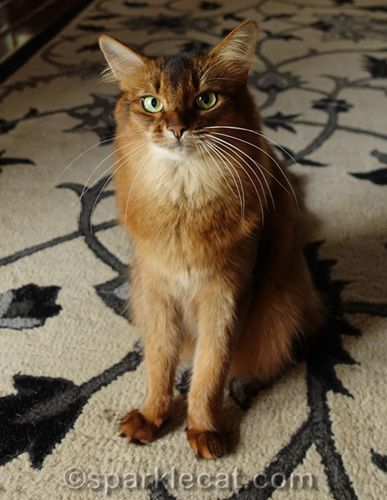 Well, I was a little bummed! There was a cat show this weekend, but TICA doesn’t have a Pet Me Cat program, so I had to stay home. But my human went to help out my breeder with her kittens. 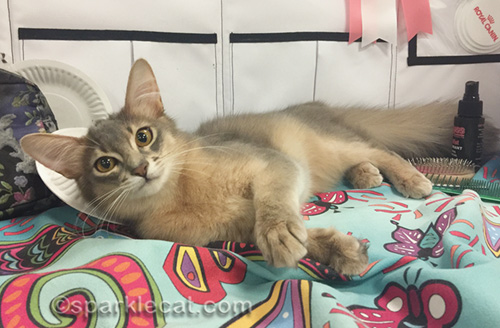 Remember my niece Billie? She was there, as was her brother Louie. My human took Billie to all the rings both days. 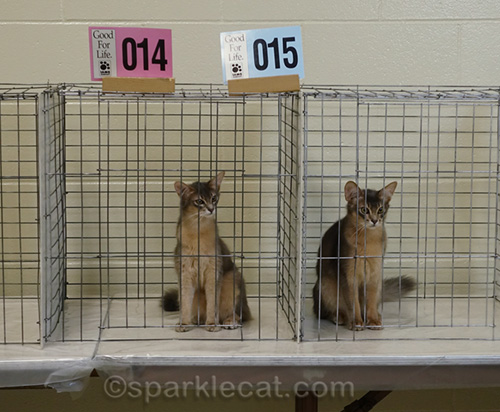 As you can see, she has gotten a lot more poised since the last time my human saw her a few weeks ago. 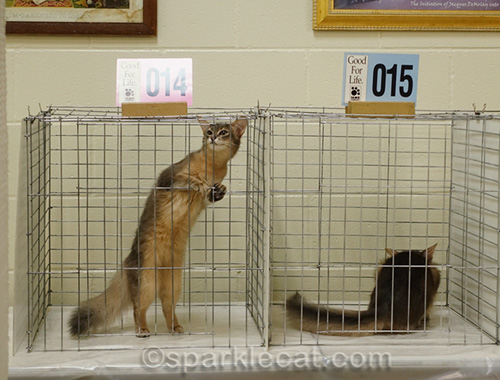 She is also way more curious about her surroundings and enjoying checking everything out. 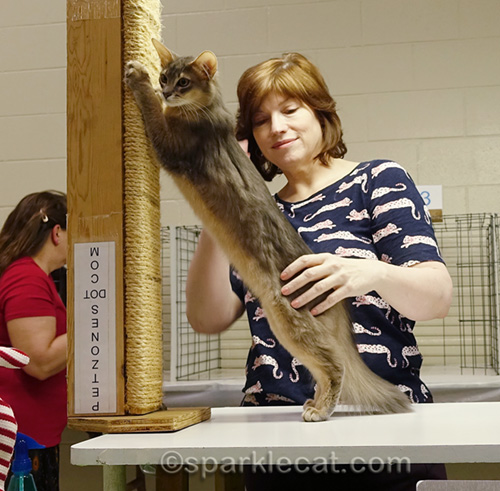 Billie was much more comfortable with the judges. 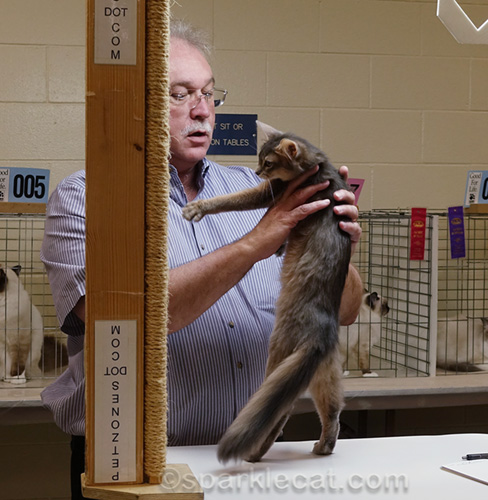 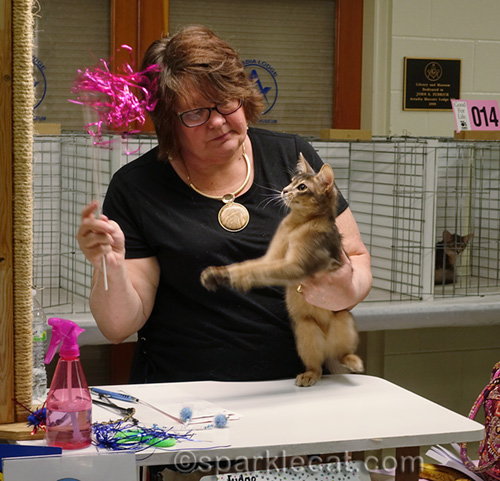 Then there was Louie… he is a maniac! He earned a regional kitten win last season so he needed photographs. Our breeder took him to the show photographer for pictures, and my human came along — and wound up having to play cat wrangler! He kept leaping off the table and running around and playing hide and seek by the sofa. When my human went to fetch him, he licked her face. He thinks everybody is his best pal. 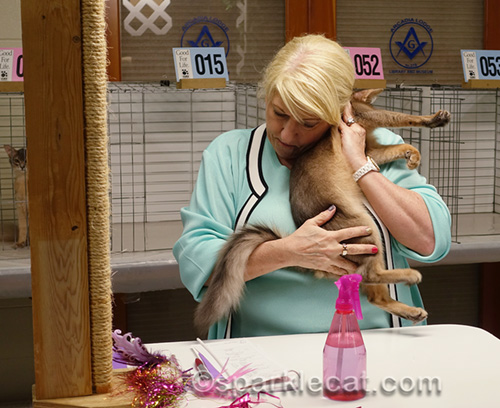 The judges certainly liked him a lot. 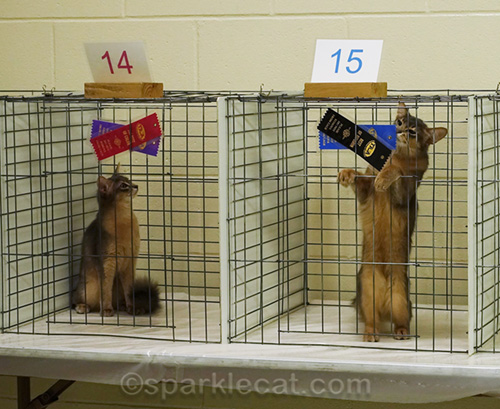 He has developed more quickly than Billie, so Louie got the Best Somali kitten ribbons in the rings. I don’t think Billie minded. 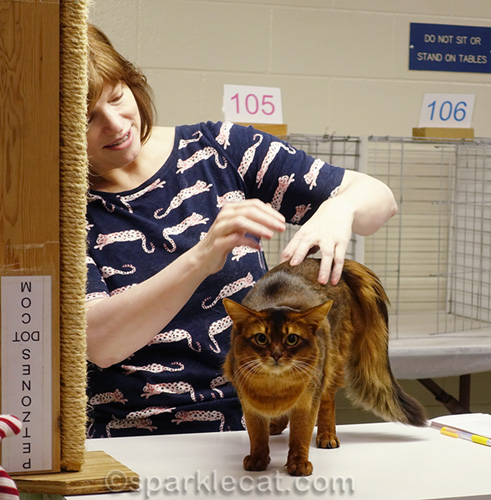 My half brother Sizzle was there too, looking handsome. He got a couple of finals over the weekend. 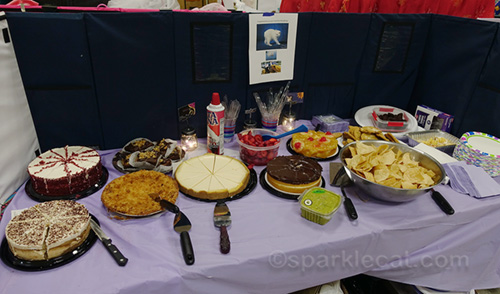 There was also a three-way Supreme party! It was to celebrate my half-sister Vana, and my pals BJ and Bing getting their Supreme titles. Vana and BJ weren’t there, but it didn’t matter because it looks like it was all human food at the table. They had so many sweets and desserts, in fact, they wound up having the party again the next day, and included an American Curl who Supremed that weekend. 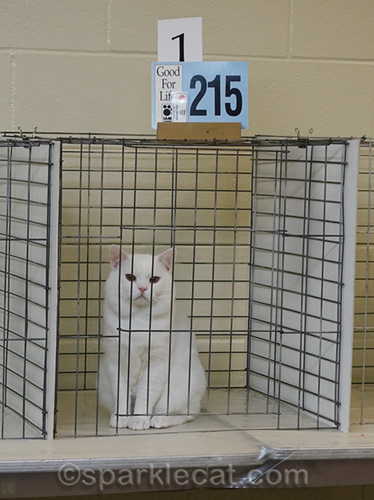 Some of you may remember Bing from my first Portland show. He’s a Manx and just an all-around great cat. As you can see, he continued his winning ways during this show. He was the Number One best cat in this judging ring. 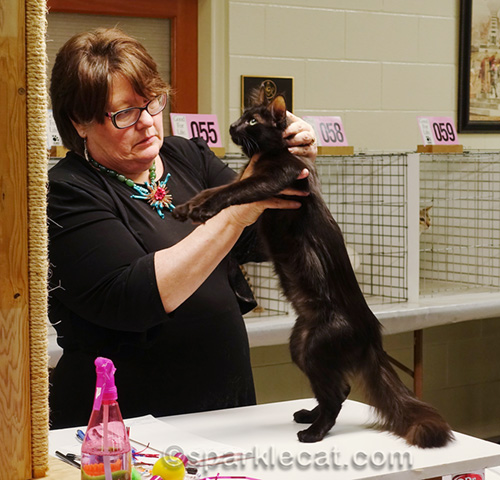 There were other friends there too, like this Turkish Angora kitten, Mace. He lives with BJ’s human. He was a big hit with the judges. 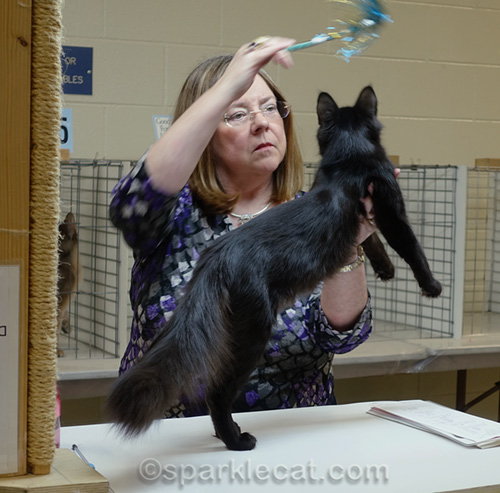 The thing my human liked the best about him is he totally has a BatCat silhouette! Which is one big difference between Turkish Angoras and Somalis. The Turkish Angora breed standard requires the BatCat ears (although they don’t call them that). Somali ears need to be wide set to fit our breed standard. 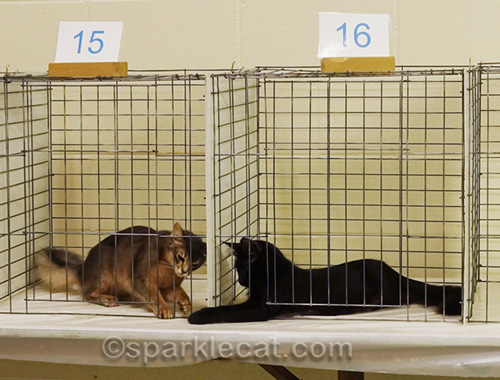 Louie and Mace were often next to each other in the judging ring… and they had a great time fooling around. 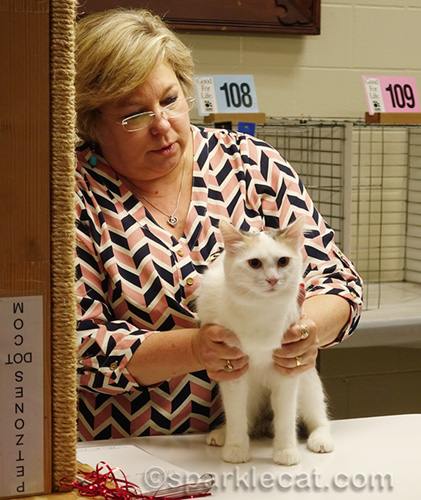 My human’s friend who breeds Turkish Vans was also there with kittens, and she was showing one of her girls, Sabri. So my human had lots of fun at this show… but she would have had more fun if I had been there. 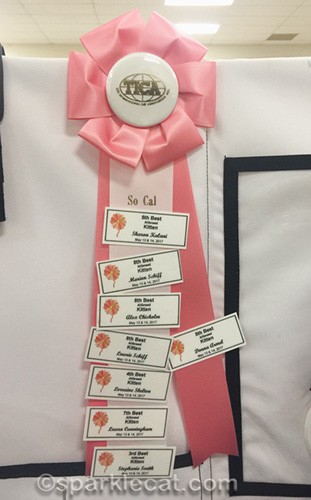 Oh, and if you are wondering how Louie did for the weekend (Billie didn’t get any finals), he got eight finals out of 13 rings!