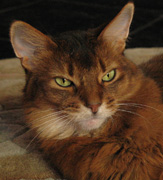 At the beginning of the month my human was running around at one of those convention type things she likes to attend. This one was called Book Expo America, which makes sense because after the last day she came home with a big bag of books. A lot of them are cat books for me to review.

Even the bag had cats on it, but they are the sorriest looking cats I’ve ever seen. 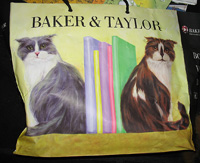 That said, a bag is still a bag.

In addition to the books, my human brought home a couple of other things. One of them she said was especially for me. So the moment she opened it up, I started playing with it. 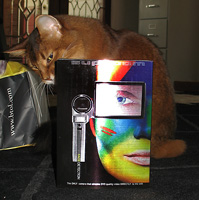 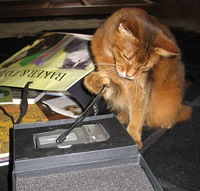 But according to her, it’s not “that type of plaything.” It’s a new video camera to make more movies of me. What kind of a “plaything” is that? Heh. 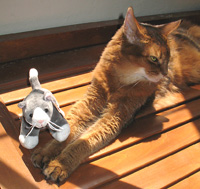 She tortured Binga with it for a while before sending it off to her boyfriend’s niece.

Boodie missed all the so-called excitement. My human bought some replacement liners for the electronic litter box and Boodie (dumb as usual) has mistaken them for a cat bed.

You’d think she would latch onto the bag, or the new box my human brought home (I’m not sure what was inside — some steam cleaner that’s cat-safe, apparently). But since she didn’t, I claimed the box for myself.

I had an emergency mid-month. I got something stuck in my throat and couldn’t get it out. My human had to take me to vet. It turned out to be an especially delicious piece of wrapper — I literally bit off more than I could chew. 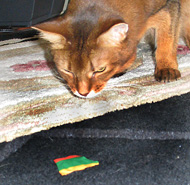 Although the bill could have been much, much worse than it was, my human was not thrilled with this. “That vet visit should be your birthday gift,” she huffed. I was not pleased with her attitude.

Of course she was only bluffing, and she came home with a big bag just for me.

I have to say, though, it was the strangest gift I’ve ever gotten.

I watched as my human set it up. 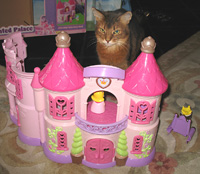 But you know what? All us cats decided we liked it. 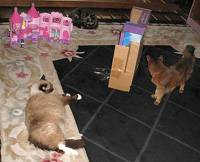 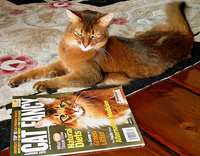 The month ended on a sour note. For one thing, we got the July issue of Cat Fancy

— it’s the Somali issue. And there’s not one photo of me in it. I’m totally insulted.

And to add insult to injury I got my PetSmart 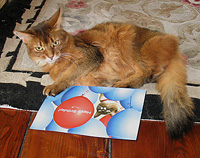