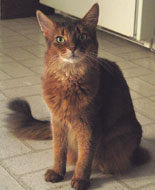 My human is still having trouble finding food that will please all us cats. As a result, mealtime has gotten very stressful and we’re all very short tempered. 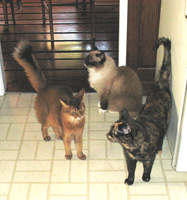 Well, except for Boodie. She just spends her time looking at things that are invisible to everyone else. 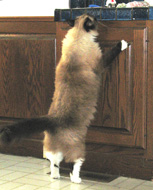 Binga and I always quarrel while my human is fretting over these lousy-tasting cans of food. 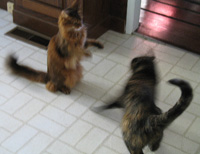 To avoid fisticuffs in the morning, sometimes my human feeds me breakfast in bed. I like that!

I spend a lot of my time looking out the window of my human’s home office and dreaming of the day when I will be given food that tastes good again.

I was kind of hoping that maybe I’d get something edible for my birthday this year, to make up for all the junk I’ve been given over the past several months. Well, it was close — my human started off the day by giving me a catnip plant.

Of course, I couldn’t get two sniffs in without Binga wanting some of the action. 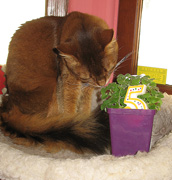 Same thing with the rest of my birthday gifts. No sooner had my human laid them out than along comes Ms. Bossy. 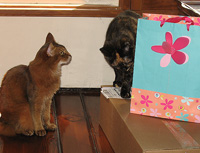 And these gifts were definitely for me. The big cardboard box was even addressed to me!

When I looked inside the box, however, I couldn’t quite figure out what it was. 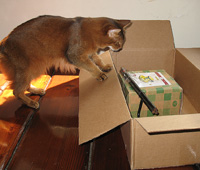 While my human was opening it up for me, I played with the twist tie. Maybe, I thought, that was the gift. Kind of chintzy, but I’ve never been known to turn down a twist tie. 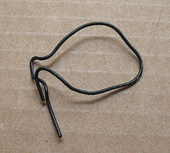 But there was more.

I still wasn’t sure what I was supposed to do with it. 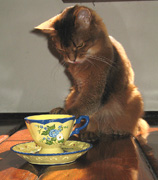 “Part 2” was just as puzzling. At first I thought, “Bug Fest! Yay, my human finally got me some really yummy treats!” But slowly it began to dawn on me that this bag wasn’t food for me at all. 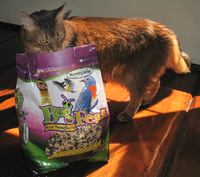 My human took the teacup outside and put the Bug Fest in it. It’s bird food! 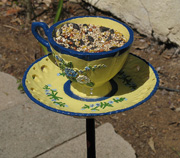 I looked out the window in utter amazement. Instead of buying me gourmet food for my birthday, she bought gourmet seed and bugs for the birds outside. How lame!

Then I finally got it — she set it up right outside the office window so I can watch the birds hanging out. Well, it’s a good idea on paper, I suppose, but I’ve been waiting and waiting and I have yet to see any birds.