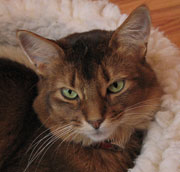 Thankfully my human has slowed down a little on the ebay

stuff, or at least the stuff I have to pose with. I was beginning to enjoy one doll, until I was told it “wasn’t a toy.” (Seriously what’s up with that — it’s a doll!)

The other things, like the jewelry, are clearly useless. I hope my human sticks to auctioning exercise DVDs and videos — those I don’t have to pose with. 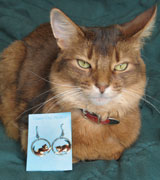 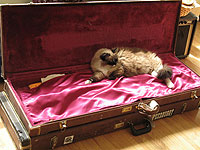 Other promising events that didn’t pan out included the basses my human’s boyfriend brought home. He was doing something to them — don’t ask me what, I don’t play an instrument. I just sing. But the bass didn’t interest us cats anyway — it was the bass case. Boodie got to it before I did, unfortunately.

Then there was the horrible hairball remedy incident. My human knows I hate the Petromalt

gunk, so she asked her boyfriend to bring home some tuna flavored stuff

from the vet clinic where he works. Like some fake tuna flavoring is going to hide that foul smell and taste!

Boodie wasn’t fooled for a second. 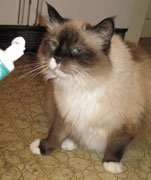 Binga, the freak, begged for it! She’s nuts. 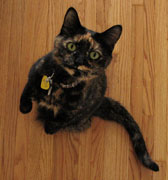 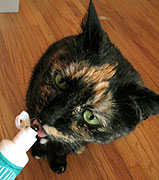 I could smell that stuff from a mile away, so I ran off. So my sneaky human waited for me to take a nap — then she smeared it on my chest!

I was so grossed out that I ran downstairs. I sat on the bass case, washing off the goo and wishing desperately that the case had been open so I could have wiped the stuff all over the plush interior. 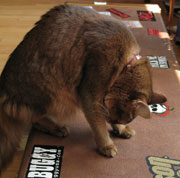 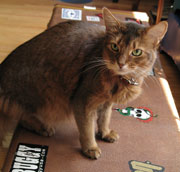 Finally something good happened — my birthday! I was really anxious to find out what my human got me this year. It appeared to be bigger than a collar (yay!), but smaller than a new cat tree (darn!). 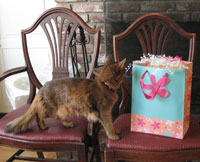 This year she wrapped it in a gift bag, which is even more fun than wrapping paper.

I finally got the box out of the bag — it was something called a “Panic Mouse.”

I couldn’t quite figure out what it was supposed to do.

My human stuck a toy on the end of its metal tail. I waited for something to happen. And waited.

It turns out my human forgot to put batteries in it!

I even checked in the box to make sure there weren’t any there. Nope. Empty. How lame is that? 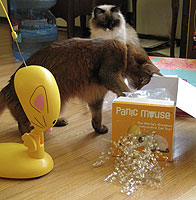 So a couple of days later she finds batteries and puts them in (did I say she’s terminally slow?). She turned on the Panic Mouse and the toy whipped around like mad. 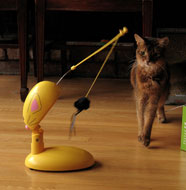 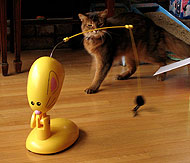 In fact, it whipped around a little too madly. I thought maybe it’d be better to play with it from a higher perch.

I didn’t like that either, so I tried batting at it from under the chair.

I came to the conclusion that this thing was dangerous! So I decided to look for a safer toy. And found one.