I had the most awful dream the other day. I dreamt that instead of my beautiful fluffy tail, I had Binga’s dumb, plain-wrap tail.

Then I woke up and for a moment I thought it was true!

Then I realized it was just Binga sleeping up against me. Whew!

Can I just say I have the dumbest human on earth? I was hanging around on one of the bookcases when I saw a yummy-looking potential treat crawling on the ceiling. 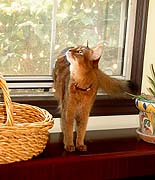 Do you know what my human did? She tried to catch it and put it outside! But it got away from her. I heard somewhere that the average human eats 4 spiders a year in their sleep. I really hope that is just a myth — I would really be bummed if she got that spider and I didn’t.

It was a slow month around here, as far as workers being around. We just had one painter guy doing some touch up work. He was the best out of all of them, though, probably because he has a couple of cats himself. Boodie really took a liking to him. Although she kept her distance, she caught one of her mouse toys and left it for him on his tarp.

The big news of the month is that I turned 2! I was hoping that my human got me something better than last year’s stupid gift. I tried not to get my hopes up, however, and I was napping on the cat tree when she woke me up.

Of course she had to put the gift right where I had been sleeping. So I guess that was my first birthday gift — being disturbed from a pleasant snooze. 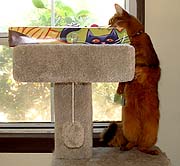 Then she took the present and, like she does with everything that’s for me, she put it on the floor. The wrapping was cool — it came from the ASPCA.

She even taped on a little toy next to the bow. Although it was a nice gesture, the toy was kind of lame. Even though it smelled like catnip, none of us cats thought it was all that exciting.

I was more interested in the main attraction — the gift inside the wrapping! It turned out to be a Motor Mouse.

And my human was even considerate enough to get the required “C” battery to make it run.

It was really cool, whether it was switched on or not. Boodie and I enjoyed playing with it. I even let Boodie play all by herself for a while. 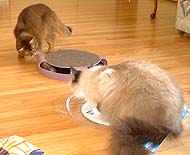 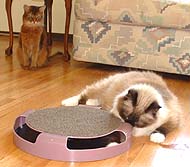 Then that killjoy came along — Binga.

She took over the Motor Mouse like it was meant for her. I didn’t get a chance to have it back for the rest of the day.

So I wound up back on the cat tree, where I had started. You know what? I don’t think birthdays are all that great. 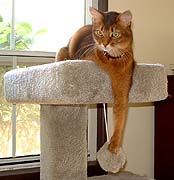