Things are starting to get surreal around here. Lately, Binga has been dashing around and leaping in the bathtub (only when there’s no water in it, of course). She does this every night, jumping in and rolling around like a maniac. She thinks this is fun and insisted that I try it. Honestly, I don’t see the appeal. 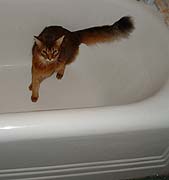 Then Boodie spent about three days with this big bandage on her back footâ€”apparently she broke one of her toenails. It’s too bad we don’t have any video of her walkingâ€”she’d take a step, shake her back foot, take another step and do it again. Her walk made her look like this guy, Charlie Chaplin, who my human has watched on TV on a show called Silent Sundays. It’s on Turner Classic Movies and she’s always talking about it. This Charlie Chaplin guy was on once or twice.

Boodie broke her nail the same day we had plumbers overâ€”there was some disaster in the second floor bathroom that needed to be fixed. I hated the plumbersâ€”there was this one guy who said I looked like a squirrel. The nerve! He’d never seen a cat like me and wanted really badly to touch me. After a comment like that, he wasn’t getting near me. Jerk.

The best thing about this month was that I turned a year oldâ€”that means no more kitten food! I get the high-end Nutro Gourmet Chunks like the other cats.

My human had a little birthday celebration for me. She’s seriously into birthdaysâ€”hers isn’t ’til almost the end of July and she’s had it marked on the calendar since, like, May. See, with this birthday thing you’re supposed to get really incredible gifts and be treated special all day. I don’t get the part about being treated specialâ€”I’m special every day, after all. But the gifts I can understandâ€”I thought maybe I’d finally get that huge cat tree I keep dreaming of.

Well, my birthday didn’t turn out like I thought it would. First my human made me wear this really stupid ribbon that said, “I am 1.” I felt like an idiot. 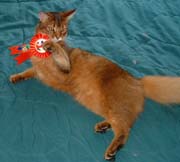 Then she pulled out my gift. Obviously it was too small to be a cat tree. I figured it was some new kind of toy, so I started to play with it before realizing that the gift was actually inside. I figured since it was my birthday it had to be something really, really good. 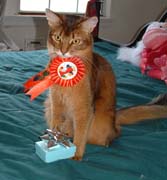 It was a new collar.

What a burn! It wasn’t even a toy! Granted, I’m glad to get that cheap, old collar off (in fact, I’d chewed the end to bits). And the new collar is soft suede with metal hearts, but geez, what an anticlimax.

This is the part that I found especially ludicrousâ€”it came in a Tiffany box. Yeah, it’s a nice collar, but I know it didn’t come from Tiffany’s. This really makes my human look like something of a poseur.

So I’ve come to the conclusion that birthdays are highly overrated. I may skip mine next year if this is what they’re all like. The really dumb thing is Binga hung out the whole time, and you could tell she wanted a birthday really bad (we don’t even know for sure what day hers isâ€”that’s what happens when you’re a shelter rescue). So my human gave her the bow to make her happy.