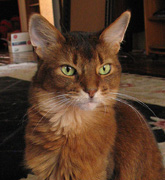 My human took my belated birthday coupon to PetSmart and cashed it in. This is the cheap trinket she came back with. She woke me up from a nap to present it to me.

Apparently, it’s a fluffy kitty dumbbell. Ahem, like I really need a workout. 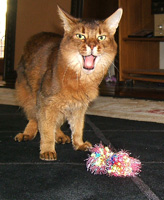 Binga and Boodie, on the other hand, could use a bit of exercise. Binga is not convinced about this. 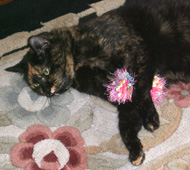 Surprisingly, Boodie gave it a try but she soon abandoned it for other, more interesting endeavors. Like sleeping. 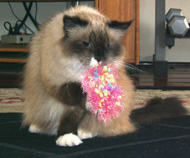 But not for long. My human took Boodie into the enclosed patio for a brushing. I was stunned at how much fur she raked out of Boodie’s coat. I think there was a whole ‘nother cat hidden in there. 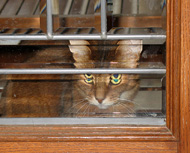 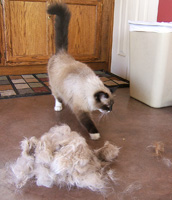 The humans have been really busy this month. They ran off somewhere called Rocklahoma and left us in care of a petsitter lady. She actually spends the night with us, so they changed the bedsheets for her. Binga loves fresh bedsheets.

When they got back, they went to some open house event held by a pet supply distributor. When they returned they had a bag full of goodies for us cats. Oh, and the dog, but who cares about her?

I was amazed by all the stuff we got! 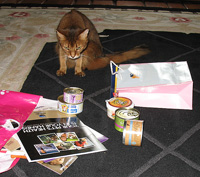 Binga was more amazed by the bag. I think bags are for sitting on, personally. 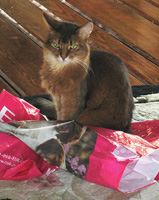 Most of it was samples of cat food, which is always potentially frightening. The human idea of what tastes good has little in common with what us cats are willing to eat. That said, there were some good selections. The By Nature organic cat food was tasty enough that I didn’t want to share with Boodie. 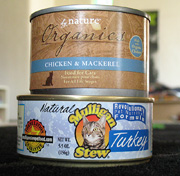 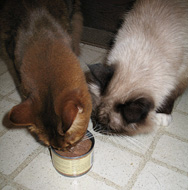 There were some also some treats that were pretty good.

After my behavior over the organic cat food, Boodie wasn’t sure she wanted to share with me.

But the best score was the awesome Tiki cat food! Just look at it — how could anyone resist? 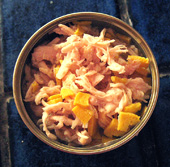 It was so good that I was really disappointed the next night when it was just my usual cat food pouch — even though I do like my pouch food a lot. 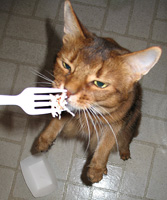 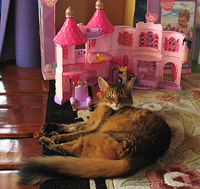 The month ended badly, however. I found out that my human might not let me keep my Enchanted Castle birthday gift! She says it was just “for show,” and she really was planning to send it off cross-country to some… some human!

She even started packing up some of it. Boodie is distraught over the news.

As sort of a consolation gift, my human brought out a “real” cat toy — some remote controlled mouse thing. 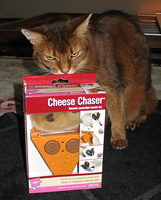 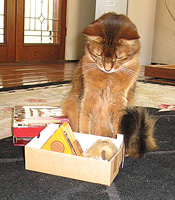 Like most of those overly-elaborate toys, it was really lame, although it got Boodie’s attention for about 2 minutes. 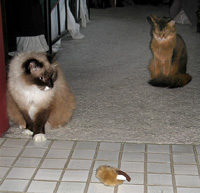 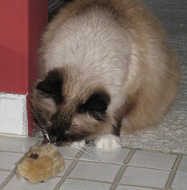 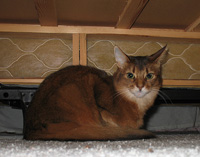 Then to make things even worse, we had an earthquake! It was the most horrible thing ever. I hid under the bed for two hours. My human acted as if it were no big deal, which only leads me to believe that this earthquake was actually her fault! She’d better not do it again, or I will be really mad.