Fortunately for us all, my human’s website started getting traffic and is making money again, so the pressure’s off — I don’t have to support her after all. Good thing… I was starting to feel exploited. It’s bad enough having to support the other two cats, who are clearly too lazy to pay their own way. Freeloaders.

The traffic returned to my human’s website just in time for her birthday so to celebrate she got herself a birthday gift — some weird looking chip and salsa bowl that plays really obnoxious music. I hate it. So does Binga. 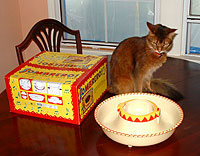 Once again there are a bunch of workers buzzing around the house. The weird thing is that they’re only doing stuff to the outside of the house. Why bother doing that when none of us cats can see it? Binga finally got off her butt and peeked through the upstairs bathroom window to find out what was up, but she couldn’t see much.

I’m not sure how Boodie feels about these workers. Every day they’ve been around, she’s been catching and killing her toys. She runs around with the toys in her mouth, meowing the whole time, and then throws them down at her feet. I thought at first that maybe she liked the workers and was trying to impress them, but now I think it’s her not-so-subtle way of warning them not to cross her. 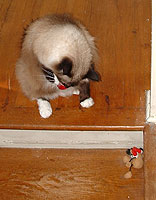 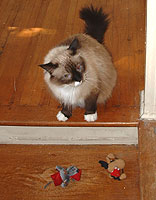 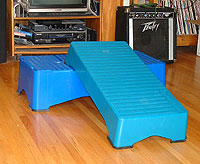 In the midst of all this activity a big box showed up on my human’s doorstep. It turned out to be something called a “TransFIRMer” — apparently she writes about these things on her website, and the company she works with gave her one for free, along with a bunch of DVDs. She was thrilled! She loves jumping around on this thing. I decided to find out what the excitement was about.

The truth is, I don’t see anything particularly exciting about this contraption. It doesn’t even make that great of a scratching surface. I suppose it’s okay to pose on. 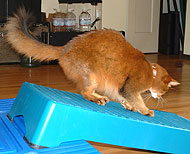 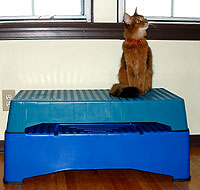 After checking out the TransFIRMer, I decided to have a good, long stretch. My human said I was doing a “cool down.” I think she is out of her mind.