Binga has still commandeered the Motor Mouse. My birthday was a total gyp.

Sometimes my human really gets on my nerves. It isn’t anything specific that she does. She’s just annoying occasionally and so I ignore her and pretend I am not her cat. This time I even tore off my collar and left it lying on the floor.

Boodie has never had a collar. I think she is envious. 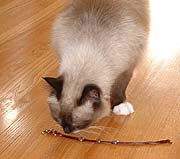 As soon my human found the collar she put it back on me. But I think she was annoyed with me too because I looked outside and she had made friends with some stray 6-toed cat. 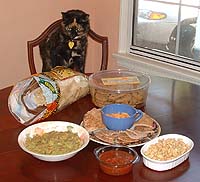 I think he lives somewhere in the neighborhood. He likes to flaunt the fact that he’s running around free and we’re not. It especially grates on Binga. My human’s boyfriend had a barbecue for some friends one Sunday and Binga got all excited. She loves parties. She especially loves party food.

She didn’t get to check out the spread for very long. She got exiled to the cat tree. 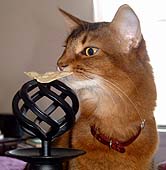 I don’t like parties. I went up to the bedroom and stayed there. My human brought up a tortilla chip for me. I think those chips smell funny. Humans eat weird things.

I thought it was more interesting a few days later, when it was laundry day. I don’t like it when the sheets get removed from my bed. 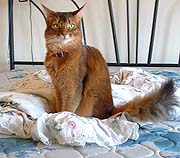 But I do like it when the new ones are brought out.

My human’s birthday was this month. Her boyfriend didn’t get her anything interesting (at least, nothing interesting to me. I mean what’s a cat going to do with a blouse and a piece of cardboard with some writing and numbers written on it?). The dumbest thing he got her was a plush frog wearing a turtleneck.

My human tried to get me to pose with it. I almost stopped speaking to her again.

I have been itching all month and I wound up with a big sore behind my ear. It really didn’t bother me all that much, but my human kept staring at it. I should have known that meant trouble.

One afternoon, she woke me up from a pleasant dream, but it wasn’t for any birthday treat, that’s for sure.

I saw that big, black cat carrier and I knew this was not going to be fun! 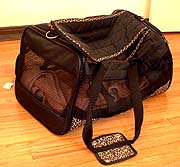 My human stuffed me in that horrible thing and, even worse, put me in the car! 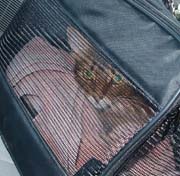 I wound up in some horrible torture chamber. This guy put me on a scale and said I weighed 6 and a quarter pounds. 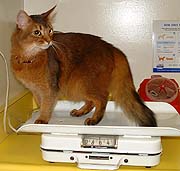 Then he left and I hid behind a fan. The room smelled terrible, like medicine or something. Yeech. This guy with a white coat came in and looked at me. He said I was cute.

He checked out my sore and said it was just from scratching, nothing more. Then he rolled me over and looked at my stomach and said I needed Advantage.

My human said she already had some at home waiting for me and the other two cats. I remembered that stuff from last year — it was gross! What a rotten day.

Even though I knew I was going to have to deal with that stinky Advantage stuff once I got back, I was still relieved to be home.